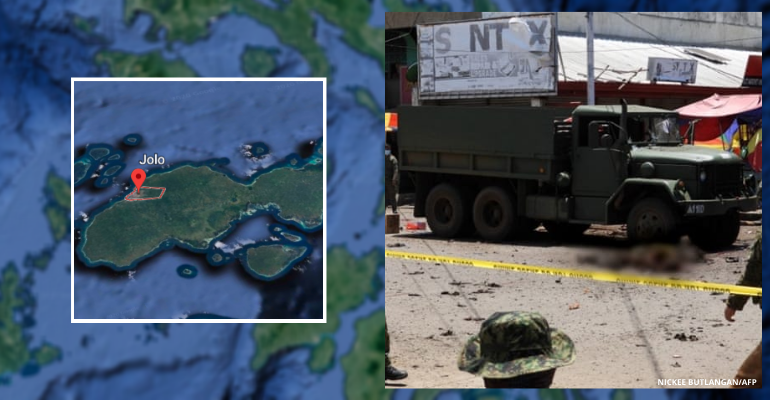 Two explosions jolted the insurgency-plagued town of Jolo, Sulu on Monday, August 24, killing at least 15 people, including seven soldiers and a suspected suicide bomber, the military and the police disclosed.

Initial reports said the first explosion happened at around noon, targeting a military truck parked in front of a commercial building near the Jolo town plaza. The blast killed at least six soldiers and six civilians, according to Major-General Corleto Vinluan, chief of the Western Mindanao Command.

The second blast happened at around 1 PM at a nearby street, as investigators were conducting a post-blast assessment.

Citing unverified accounts, Maj-Gen Vinluan said a woman detonated off a hand-held improvised explosive device (IED) as a soldier approached her. Both the suspected bomber and the soldier, as well as a policeman, died.

Meanwhile, around 70 other soldiers, police officers, and civilians were injured, Colonel Rafael Abundabar, a spokesman for the Western Mindanao Command, told Rappler.

Armed Forces of the Philippines spokesman Maj-Gen Edgard Arevalo said “the 11th Infantry Division and the Joint Task Force Sulu are on high alert following this incident. We advise the public to stay calm but be vigilant to monitor and report any suspicious persons or items or unusual activities in the area.”

These attacks were reminiscent of twin suicide bombings that targeted a Catholic cathedral, also in Jolo, in January last year.

At least 23 were killed and more than 100 injured in that attack.

“We strongly denounce the twin blasts that transpired in Jolo… today. Grave acts against humanity, such as these, have no place in our society, especially as we continue to respond to the Covid-19 pandemic,” Communications Secretary Martin Andanar said.

Hatib Sawadjaan, deemed an acting “emir” of the Islamic State in Iraq and Syria in the Philippines, is included in the United States’ list of global terrorists. His group was said to have aided the Indonesian couple behind the suicide bombings at the Jolo cathedral.

Likewise, the same group is also suspected of the twin bombing that left eight people dead and more than 20 others injured in a suicide bombing in a military camp in Indanan town, Sulu in June last year.

The attack on Monday came just weeks after the arrest of another Abu Sayyaf chieftain, Anduljihan Susukan, through the intervention of Moro National Liberation Front leader Nur Misuari. Susukan had been wanted in the Philippines and Malaysia for a series of kidnappings off the coast of Sabah from 2013.