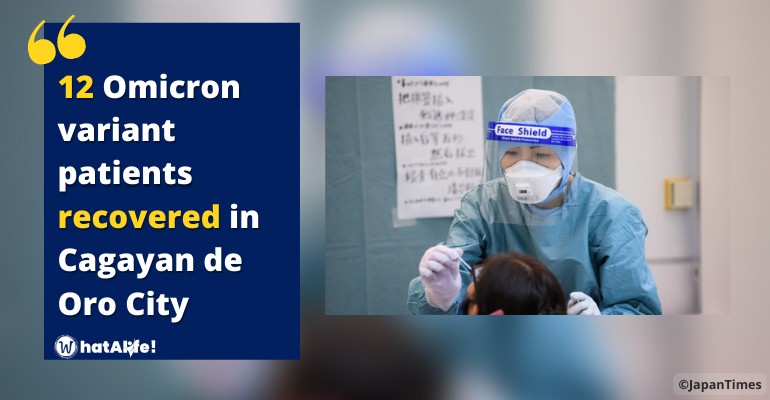 CAGAYAN DE ORO CITY, PHILIPPINES — The City Health Office (CHO) reported on Wednesday that two of the 14 confirmed Omicron variant infected persons of Cagayan de Oro City died due to comorbidities, while the remaining 12 were declared recovered by the Department of Health (DOH).

CHO medical officer Dr. Ted Yu Jr said on Wednesday that “The DOH released the results from their Philippine Genome Center last March 6 but the samples taken from these residents were done from Jan. 30 to Feb. 4 yet. The 14 consists of seven males and seven females, all local cases with ages ranging from two years old to 83 years old with a mean age of 42 years old.”

“About 11 of them were certified recovered from Feb. 7 to 19 while one tested negative RT-PCR (reverse transcription-polymerase chain reaction), while the two patients, one of whom is unvaccinated, died due to their comorbidities” Dr. Yu added.

The Philippine Genome Center takes a random sample of thousands of Covid-19 cases around the country, and the results take about a month to get back.

The finding and confirmation of Omicron variant cases in the city coincided with a dramatic increase in cases that began in early January and lasted until late February, before decreasing. The CHO and Mayor Moreno both attributed the drop in cases to single digits to the city’s high immunization rate, which has helped vaccinated patients recover faster. – WhatALife!