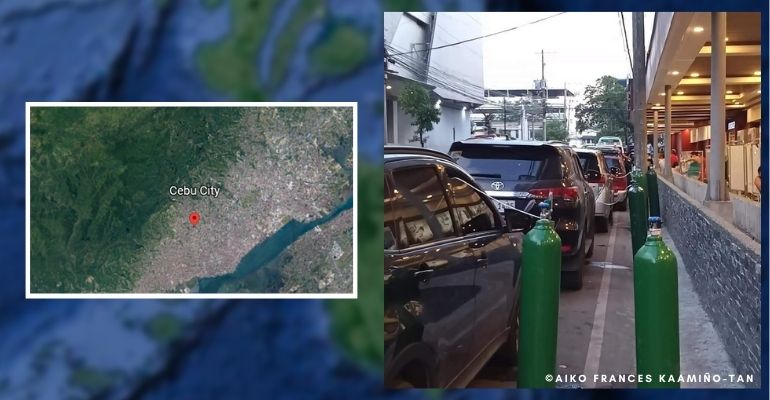 A Facebook post showing supposed patients inside their car queueing in front of a private hospital with oxygen tanks stationed outside their cars has gone viral since Sunday night, August 1.

Cebu City councilor David Tumulak visited the said hospital later that evening and reported that “at least 31 patients were waiting for their turn to be accommodated by the hospital.”

Tumulak added that while most of the waiting patients have a series of coughs and difficulty breathing, it’s undetermined whether these are COVID-19 cases since they are yet to undergo swab testing.

According to ABS-CBN News, Cebu City hospitals are already full, while cemeteries can no longer accommodate burials following the COVID-19 surge in the city, Tumulak said on Monday.

(All of our cemeteries in the city proper are getting full but in the rural area, we still have 2 cemeteries that can still be used.)

(Those who die that cannot afford cremation, especially those positive for COVID-19, will have to be buried within 24 hours.)

Tumulak said ambulances in the city are going around hospitals as they wait for patients to get through triaged and admitted.

As of Sunday, Cebu City has recorded 415 new cases, bringing its total active infections to 2,700.

(We’ve been seeing a line of ambulances since last week. We can’t let them enter the emergency room immediately because it’s also full.)

The councilor also had the chance to talk to the drivers, learning that most of them have already driven around, even reaching Lapu-Lapu and Mandaue City looking for vacant hospitals. He then appealed to the national government to intervene in hiring more health workers as the virus cases surged in the city.