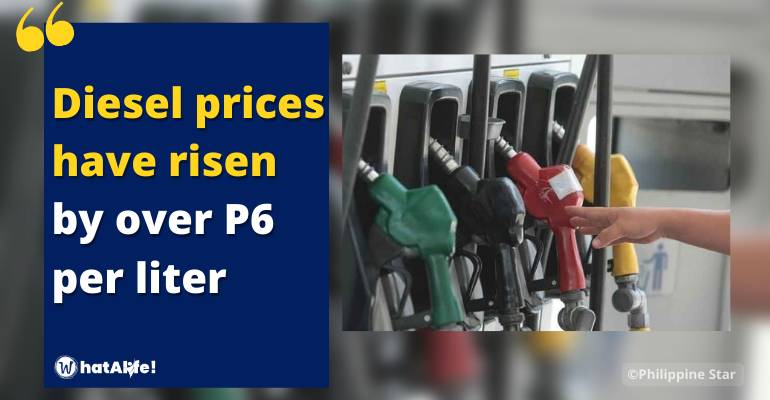 MANILA, PHILIPPINES — As a result of Russia’s invasion of Ukraine, oil companies announced their highest price hikes on Monday, March 7.

Shell, Caltex, Seaoil, and CleanFuel have announced a diesel price hike of P5.85 per liter and a gasoline price increase of P3.60 per liter.

Kerosene, which CleanFuel does not provide, will increase in price by P4.10 per liter.

Prices of gasoline and diesel had already risen by 31.3 percent and 44.1 percent, respectively, before the announcement, while kerosene had risen by 34.2 percent from a year ago.

As a result of Russia’s invasion of Ukraine, the global benchmark Brent crude price jumped to above $119 per barrel.

You can see here in the Twitter post discussing possible interventions in the face of escalating oil prices.

The price of Dubai crude has risen by roughly US$ 3.00/bbl week on week. MOPS gasoline and MOPS diesel have both increased by nearly $2.50 per barrel and $2.10 per barrel, respectively. Read more here.

The Department of Energy anticipates that if Dubai crude reaches $120 per barrel, gasoline prices will climb to P78.33 per liter, while diesel prices will rise to P68.97 per liter. Kerosene is expected to cost P71.21 per liter, while liquefied petroleum gas could cost P107.08 per kilogram.

Meanwhile, the price increases will take effect on Tuesday, March 8. Other oil firms are anticipated to hike their prices in the same way.

The government, on the other hand, is proposing a one-time P2.5 billion ($49 million) gasoline subsidy program for public transportation drivers.

The Development Budget Coordination Committee had stated that the money would be used by the Department of Transportation to provide fuel vouchers to 377,000 drivers. – WhatALife!

Also Read: Update on global oil prices in the midst of Ukraine-Russia war