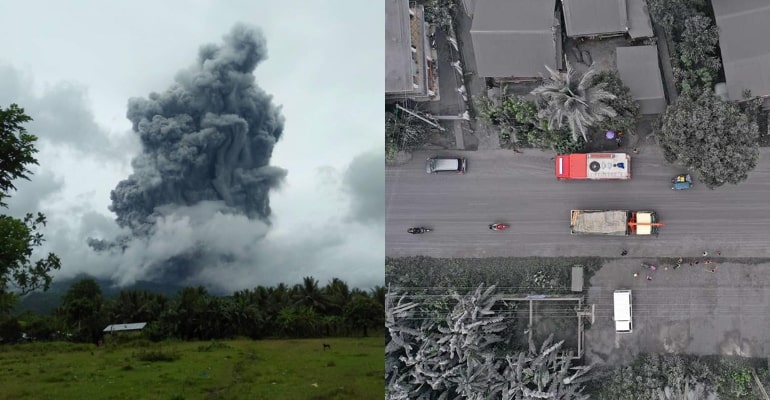 The Philippine Institute of Volcanology and Seismology (Phivolcs) confirmed the event through a statement on Twitter on Sunday.

“This is to notify the public and concerned authorities of an ongoing phreatic eruption at Bulusan Volcano,” the statement said.

In Phivolcs’ official Volcano Bulletin, Mt. Bulusan’s alert level was raised from 0 to 1, confirming that it is in an abnormal condition.

The phreatic eruption lasted for 17 minutes, starting at 10:37 am on Sunday.

“The event was poorly visible through cloud cover over the edifice although a steam-rich grey plume at least 1 kilometer tall was observed from Juban, Sorsogon and was subsequently observed to drift west,” said Philvolcs.

The spewed ashes also covered the nearby towns, such as Juban, Casiguran and Irosin.

In the town of Irosin, DRRM coordinator Joseph John Perez reported the villages Bolos, Gulang-Gulang and Monbon to be affected by ashfall.

Perez and members of the DRRM said that possible evacuation centers in the towns of Juban, Irosin, Casiguran and Bulusan are being prepared.

Meanwhile, motorists and light vehicles were also delayed due to low visibility caused by thick ash.

In the latest report of Phivolcs, Bulusan Volcano is still at Alert Level 1. There have been 29 volcanic earthquakes recorded during a 24-hour observation.

Mt. Bulusan is a stratovolcano and is considered one of the most active volcanoes in the Philippines. It is located about 70 km southeast of another active volcano in Albay province, Mayon Volcano. – WhatALife!