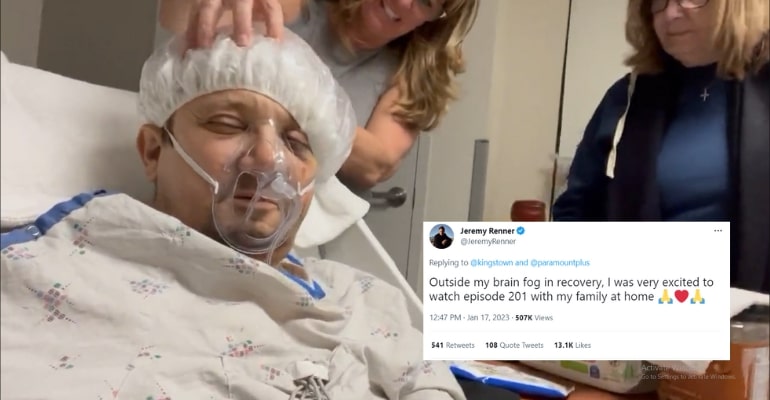 USA — Marvel star Jeremy Renner is finally home after two weeks in the hospital, recovering from the unfortunate accident of getting crushed by his snowplow on New Year’s day.

Hawkeye actor Jeremy Renner updates fans on his recovery status through a tweet, replying to the promotional video post of Season 2 of his show, Mayor of Kingstown.

“Outside my brain fog in recovery, I was very excited to watch episode 201 with my family at home 🙏❤️🙏,” he wrote.

Renner has been open to fans about his road to recovery after his unfortunate accident on New Year’s Day. The actor suffered major trauma and blood loss after being run over by a snowplow while attempting to clear the roads near his home, according to Sky News.

He was later conscious when help arrived and was later airlifted to the hospital. Renner suffered blunt chest trauma and orthopedic injuries, making him stay in the hospital for recovery for over two weeks.

Although Renner and his family have shown a positive light to his recovery, his sister says they are “thrilled with his progress,” an unnamed source noted that the actor’s recovery could take years and multiple surgeries.

“It’s much worse than anyone knows. Jeremy is very aware of the fact that he almost died out there. The right side of Jeremy’s chest was crushed, and his upper torso had collapsed. He also had a bad head wound that was bleeding and a leg injury,” the source told RadarOnline.

The source added that further surgeries might take place in the next weeks.

“Word is the damage to Jeremy’s chest was so substantial it had to be reconstructed in surgery. … So far, he’s had two surgeries and he will likely require more in the weeks ahead on his leg. Doctors tend to space out operations to allow time for the body’s natural healing process to kick in, and that’s the case here,” they added.

Another source also said that it could be two years before the Oscar nominee is back to his old self. – WhatALife!