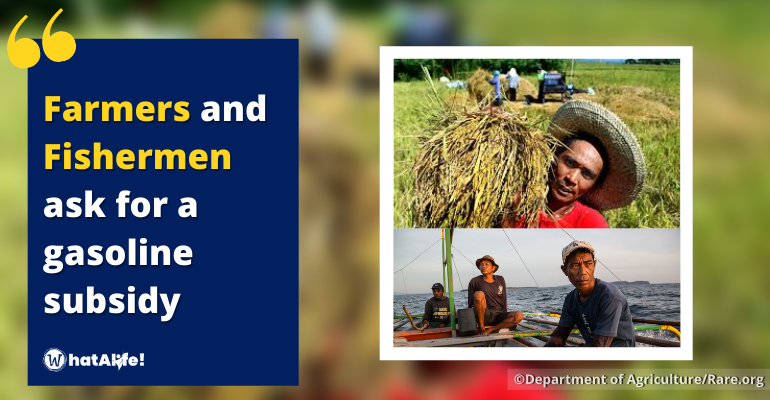 MANILA, PHILIPPINES — Farmers and fisherfolk say they will need fuel substitution and gasoline subsidy if the government reaches its agriculture production targets, stating that the rising fuel cost is impeding their operations.

Agriculture associations asked the government to lower fuel prices and subsidize their businesses in a statement released on Tuesday.

Rep. Argel Cabatbat of the Magsasaka Party-list stated that rising oil prices indirectly affect farm input prices. This is especially true when farmers and fisherfolk are already “bearing the brunt of skyrocketing costs of fertilizers and the unreasonably low farm gate prices of their produce.”

“Oil prices have an indirect effect on the prices of farm inputs, and we fear that the rising prices of petroleum products will adversely affect our farmers and prices of their produce,” Cabatbat said.

Gasoline prices have already increased by PHP7.95 per litre since the beginning of the year. In addition, diesel and kerosene prices have risen by PHP10.20 and PHP9.10 per litre, accordingly.

Meanwhile, Acting Presidential Spokesman Karlo Alexei B. Nograles said in a news conference early Tuesday (February 22, 2022) that the government has set aside P500 million from the national budget for 2022 to provide gasoline discounts to farmers and fishermen.

Mr. Nograles referred to Special Provision No. 20 of the General Appropriations Act for Fiscal Year 2022, or Republic Act 11639, which approved the Fuel Discount for Farmers and Fisherfolk Program.

Cabatbat also urged for the immediate distribution of the fuel subsidy fund to the agricultural sector to minimize the effect of fuel price hikes, citing the General Appropriations Act’s appropriated budget for the fuel discount for the Farmers and Fisherfolk Program for 2022.

Those who own and manage agricultural and fishing machinery, whether individually or through a farmer group, cooperative, or association, will be eligible for a fuel subsidy under the law. If the three-month average Dubai crude oil price reaches or exceeds USD80 per barrel.  – WhatALife!