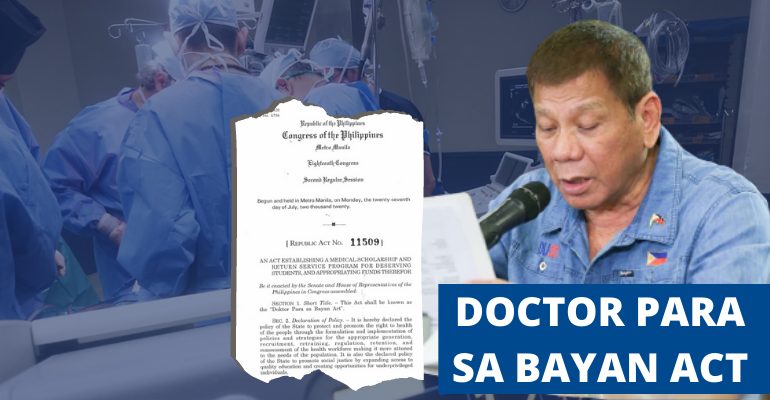 The Republic Act (RA) No. 11509 or the “Doktor Para sa Bayan Act” aims to establish a medical scholarship and return service program to help deserving students pursue medical education and training and enable them to serve government public health offices or hospitals in their hometown or any underserved town.

“Doktor Para sa Bayan Act” will be established in state universities and colleges or private partner higher education institutions in regions with no SUCs. Moreover, qualified applicants from municipalities with no government physicians will be prioritized in allocating scholarship slots to ensure that there is at least one doctor for every town in the country.

You Might Also Want To Read: DOH Medical Scholarship: A Scholarship Guide

The law mandates the acceptance of at least one scholar from each municipality of the country. But if no one is qualified in a certain municipality, other applicants will be considered.

Qualified students will be entitled to the following benefits:

To be qualified, a student must be/have:

Meanwhile, a student will lose the scholarship if he/she:

After passing the physician licensure examination and the conferment of the license to practice, the scholar will become part of the public health and medical service system. The scholar will be required to:

In times of pandemic or public health emergency, the health department may require the scholars to serve in any public health office or a government hospital where their services may be needed.

A physician who has availed of the program but fails or refuses to comply with the mandatory return service and integration will be required to pay two times the full cost of the scholarship. If a physician does not pay the costs, his license would not be renewed, but the provision does not apply to those who failed to comply with the required return service because of a serious illness.

Around 6 out of 10 Filipinos die without seeing a doctor

Sen. Joel Villanueva, the sponsor of RA 11509 that was principally authored by Senate President Vicente Sotto III, said most of the country’s doctors are concentrated in urban centers like the National Capital Region where nearly 40 percent of the licensed physicians practice their profession.

In contrast, Region 4B (Mimaropa), Region 12 (Caraga), and the Bangsamoro Autonomous Region in Muslim Mindanao have one doctor per 10,000 population.

For the Philippines to meet the World Health Organization-prescribed ratio of 10 doctors per 10,000 population, the country needs to produce over 80,000 doctors.

Citing data from the Philippine Statistics Authority, Villanueva said some six out of 10 Filipinos die without seeing a doctor for treatment in the country.

Duterte also signed three other laws on the same date, including a law that will set up an alternative learning system for adults and out-of-school children, make a certification for organic produce more affordable, and allow the Chief Executive to fast-track the processing of key documents during a national emergency.