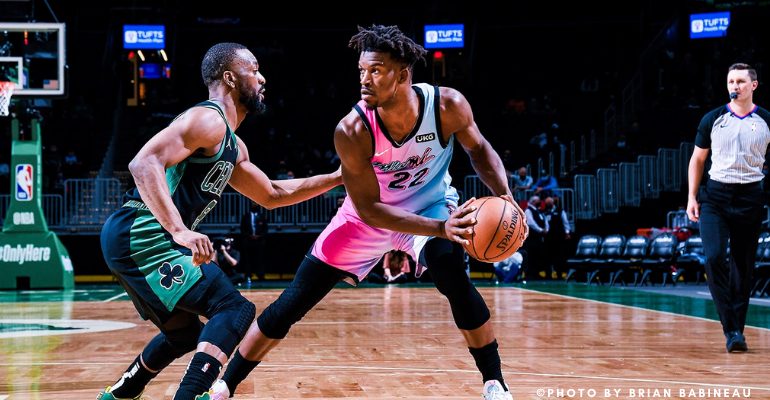 The Celtics are now in danger of falling into the play-in tournament after their upsetting loss in the Celtics vs Heat game on Sunday.

The Boston Celtics took on the Miami Heat Sunday afternoon, May 9, at TD Garden, a pivotal game to Boston.

Unfortunately, they fell behind more than 20 points for the third time in their past five games, placing them at No. 7 seed in the Eastern Conference.

The Boston Celtics have not been showing a great performance. Before their upsetting loss in the Celtics vs Heat game, they also suffered a grim defeat with the Chicago Bulls.

The Celtics were down 94-74 at the end of the third quarter. The difference in points was too much to recover from, which resulted in their loss, 121-99.

Small forward Jayson Tatum showed a mediocre performance. He played for 38 minutes and only put up 9 points on 3-for-15 shooting.

With Miami Heat’s win in the Celtics vs Heat game, they now have an overall 37-31. Heat previously defeated the Minnesota Timberwolves on Friday with 121-112. This is all due to players like point guard Tyler Herro and small forward Jimmy Butler. Herro shot 6-for-8 from beyond the arc and finished with 27 points, while Butler scored 25 points and had 6 assists, 8 rebounds, and 5 steals.

There will be a rematch between the Celtics and Heat on Tuesday, 11 May 2021, at 7:30 PM ET. The Celtics must win this game to avoid being in the play-in tournament.

According to Celtics Coach Brad Stevens, “Everybody knew the circumstances, right? Everybody knows where we stand. They know it, we know it, and they outplayed us. You’ve got to give them credit for that.

“I need to do a better job of making sure the first half doesn’t get out of hand. If it’s at the start or if it’s in the middle or wherever. And one more thing, they’re really good. So I also recognize that. I recognize that we have our hands full in this matchup, regardless of everything. But we have to play better in that first half to give ourselves a chance.”