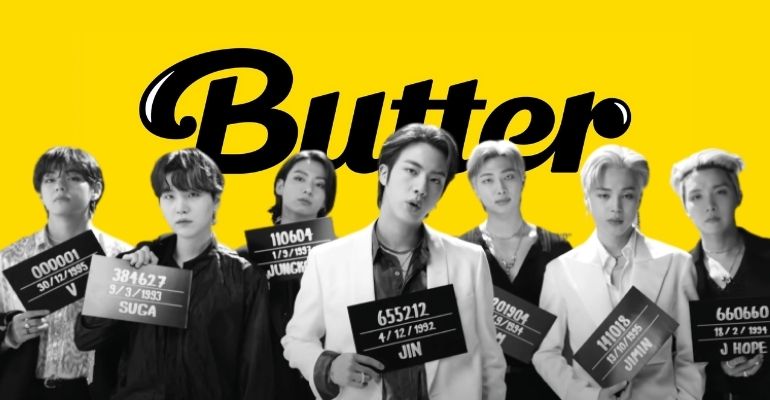 It’s been trending on Twitter with the hashtag, #ButterStableQueen — the Korean Pop group BTS’s song “Butter” has dropped to 7th on the Billboard Hot 100 rankings.

The song, famed for being as smooth as its namesake, has dropped a couple of notches. Initially first place upon its debut last May 21, and stayed there until June 5. After that, it continued to make itself comfortable for 12 straight weeks — about three months!

Though it has fallen from the top five, it’s still a historic moment for BTS. According to Yonhap News Agency, “With “Butter,” the band’s second English-language song, BTS earlier achieved the longest No. 1 streak achieved by a group since 1995, when “One Sweet Day,” a song by American singer-songwriter Mariah Carey and R&B group Boyz II Men, spent 16 weeks atop the Billboard Hot 100.”

The drop has made way for Stay by The Kid LAROI and Justin Bieber, currently sitting at number one. good 4 u by Olivia Rodrigo and Kiss Me More by Doja Cat featuring SZA are also on the chart’s upper half.

Even as BTS’s Butter has dropped a couple of spots, the fandom doesn’t think it’s something to be too sad about. In fact, 7 is the lucky number of the ARMYs! What a happy coincidence.

BTS stands for Bangtan Sonyeondan. Also known as the Bangtan Boys, they’ve been active since 2013. They reached international stardom, especially with their 2018 performance at the Billboard Music Awards. They snagged the Top Social Artist Award.

Butter reached the Top 10s of over 20 countries. Notably, the song is entirely in English.

The single is their second song with primarily English lyrics, the first one being Dynamite. They contrast with BTS’ previous discography, which featured Korean lyrics and a couple of English words or phrases sprinkled throughout.

BTS’s other English-language horse in the race, namely their summertime anthem, Permission to Dance. It peaked at #1 upon its release and has since been on the chart for five weeks.