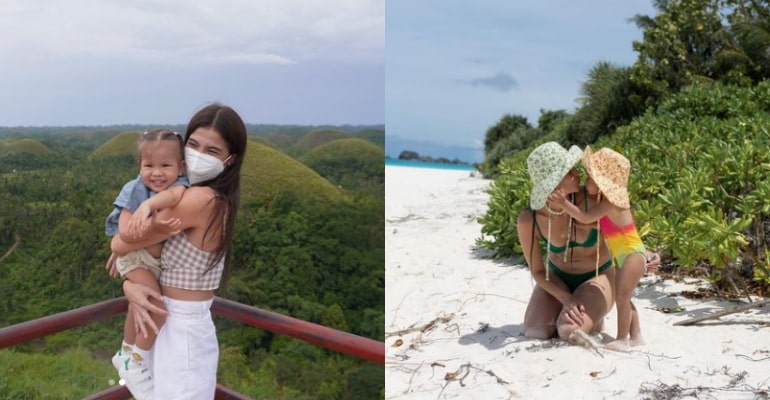 BOHOL, PHILIPPINES — Anne Curtis, alongside her husband Erwan Heussaff, went to a freediving session during their stay in Bohol last Wednesday, May 18.

The photographer behind the snapshots is their freediving instructor Mark Zapanta, who shared the photos on his Instagram page showing the couple posing beside an old, wrecked plane under the sea.

The actress also re-posted the photo with a caption admitting that she had difficulty controlling her breathing, as per her Instagram post yesterday, May 19.

During their Bohol Trip, Anne, with her sister, Jasmine Curtis, and her daughter Dahlia had a reunion with her brother Thomas James, who is from Australia. The mother-daughter pair also visited one of Bohol’s tourist spots, Chocolate Hills.

Earlier in May, the three of them also spent time at a beach in an undisclosed location, where the actress known for her role in 2014 as Dyesebel showed off her toned abs and slim body.

The TV host wore an emerald-green bikini with a white and green hat, as seen in her post on her Instagram page last May 2.

In Anne’s Instagram shared post, she showed herself with Dahlia wearing a colorful one-piece swimsuit and a matching hat like her mother. The captured snapshot also shows them sharing a kiss while enjoying the white sand.

Meanwhile, Anne will have a comeback concert this coming June 11, entitled “Luv-ANNE,” at the Newport Performing Arts Theater of Resorts World Manila. They made an initial announcement regarding the concert’s venue, but they eventually made it into a live event.

In addition to her return, she is also preparing for her most-awaited return on the hit noontime show, “It’s Showtime,” after her hiatus for more than two years from showbiz to focus on her family. – WhatALife!