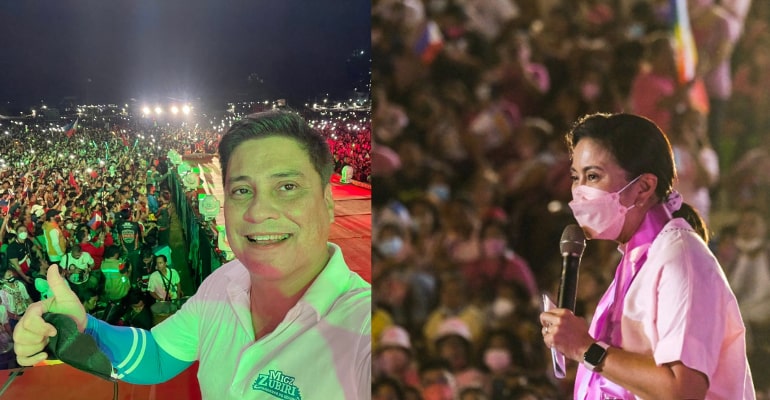 MANILA, PHILIPPINES — Vice President Leni Robredo has dropped Senator Miguel Zubiri from her Senate slate after he endorsed rival candidate Ferdinand Marcos Jr. in March, according to a statement released by her spokesperson on Wednesday.

Prior to his removal, Zubiri ran as a guest candidate for the “Team Robredo-Pangilinan” (Tropa), as well as for Robredo’s rival, former Senator Ferdinand “Bongbong” Marcos Jr.’s UniTeam slate.

According to Robredo’s spokesperson, Barry Gutierrez, this is “in contravention of the agreement with all guest candidates” not to endorse a presidential contender.

“With 12 days remaining before elections, we are moving forward with our 11-candidate Senate slate,” Gutierrez said.

Other senatorial candidates on the Robredo-Pangilinan slate include:

When Zubiri was presented on Screen during rallies where a video presentation of Robredo’s Senate bets was shown, Kakampinks booed.

Five candidates, including Zubiri, were placed on Robredo’s ticket after her team agreed not to endorse any presidential contender categorically throughout the campaign.

Only Gordon attends Robredo’s rallies on a regular basis. Gordon does not categorically endorse Robredo in his talks, but he has been putting in comments praising her leadership abilities and her anti-poverty and pandemic relief projects, Angat Buhay.

Robredo’s Senate slate for the 2022 elections was a strong but controversial one, as several of the candidates on her ticket are unlikely bedfellows given their recent conflicts. – WhatALife!