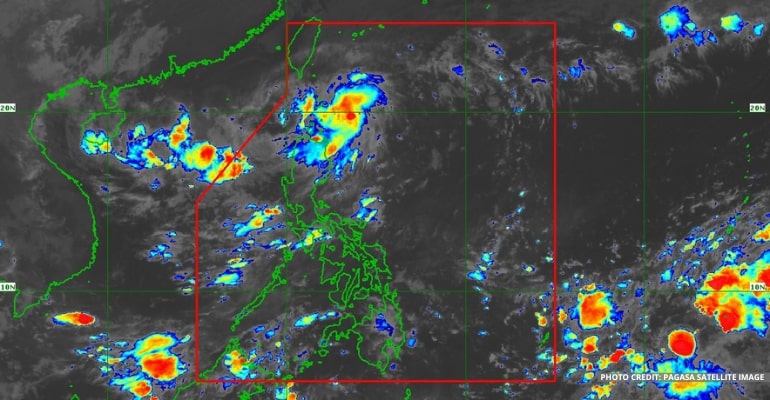 WEATHER UPDATE — According to the Philippine Atmospheric, Geophysical, and Astronomical Services Administration (Pagasa), Bagyong OBET is now affecting a large portion of Extreme Northern Luzon as of October 21, 2022, 4 am.

Meanwhile, another weather disturbance has been observed inside the Philippine Area of Responsibility (PAR).

(We spotted cloud clusters outside our Area of Responsibility over the Pacific Ocean.)

The cloud clusters may form a weather disturbance over the weekend and enter the Area of Responsibility early next week.

The Northeast Monsoon is also affecting Extreme Northern Luzon. Meanwhile, the rest of the country has better weather due to the weakening of the ITCZ (Intertropical Convergence Zone).

In the next 24 hours, the TD is forecast to move generally Westward toward Batanes or the Babuyan Islands.

By noon, Bagyong OBET may make landfall somewhere in the area of Batanes or Babuyan Island. By the evening, it will slowly move away from the country and move toward the West Philippine Sea. It will go out of the Area of Responsibility Saturday morning.

By the weekend, the TD may possibly grow stronger into a Tropical Storm category, where it will proceed to the South China Sea and then to the Hainan Province and Central Vietnam.

From today to Saturday early morning, Batanes and Babuyan Islands will likely experience moderate to heavy with, at times, intense rains, while rains are possible over the northern portion of Ilocos Norte, Apayao, and mainland Cagayan.

Meanwhile, the rest of Ilocos Norte, Apayao, and mainland Cagayan may experience light to moderate with, at times, heavy rains.

Wind Signal #1 might be raised in other areas, particularly Apayao and Ilocos Norte. The highest possible wind signal due to the passage of OBET is Wind Signal No. 2.

Today before noon, the approaching Bagyong OBET will bring strong winds over Batanes and Babuyan Islands.

Meanwhile, the Ilocos Region, Cordillera Administrative Region, and the rest of Cagayan Valley will experience cloudy skies with scattered rain showers and thunderstorms, especially in the evening when Bagyong OBET travels through.

For the Central and Southern portions of Luzon, there is a high chance of rain in the morning in Mindoro provinces, Northern Palawan Marinduque, and Romblon due to Localized thunderstorms and the ITCZ.

By the evening, due to TD OBET, there is a high chance of rain in Central Luzon, the southern portion of the Bicol Region, Sorsogon, Albay, and Masbate.

Metro Manila will have partly cloudy to cloudy skies with isolated rain showers or thunderstorms.

Basilan, Sulu, and Tawi-Tawi have a high chance of rain in the morning.

At the same time, the rest of Visayas and Mindanao are expected to have fair weather conditions, unlike yesterday, when there were cloudy skies with rain showers due to the ITCZ.

By the evening, there is a high chance of rain for Eastern Visayas, Bohol, the Caraga region, Northern Mindanao, Soccsksargen, and parts of the Davao Region.