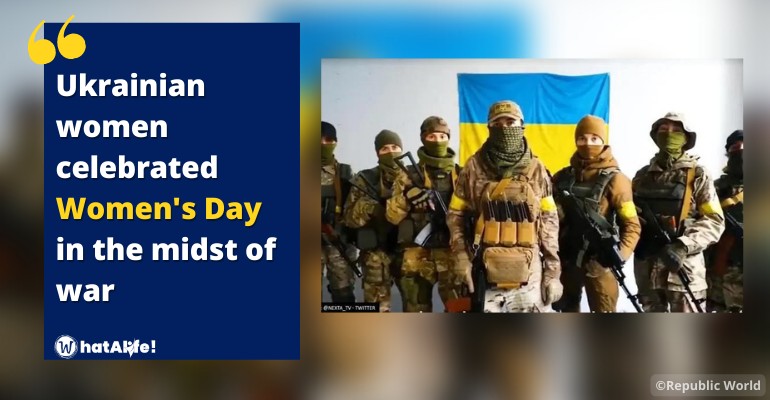 UKRAINE — International Women’s Day is widely observed in Ukraine, but Ukrainian women are taking up arms to defend their country this year.

Ukrainian women in military uniform are seen clutching weapons in a video that has gone viral on social media.

One of the women is heard discussing battling the enemy.

“We are women of Ukraine. We have blessed our men to protect our land. We have taken our children to safety. The genetic fund of our nation is reliably protected. We join the men and the Ukrainian army. We will destroy the enemy on every inch of Ukrainian land in every city, every village, forest and field. For every child, woman, old man, ruined house, street, even barn, we will shoot you like rabid dogs. Glory to Ukraine! Death to enemies!” the woman says in the video

Meanwhile, on Twitter, Ukraine’s Ministry of Foreign Affairs stated that women make up more than 15% of the regular Ukrainian army.

“During the war, gender disappears. Women and men just become one big family to protect each other. Every single person tries to do something because you feel guilty if you are safe,” said Liliya Syvytska, a Ukrainian citizen.

As she hears stories of friends and relatives battling for their nation and saving lives, including her doctor friend Samantha Hughes, who recently delivered a baby in a bomb shelter, Syvytska has been feeling guilty.

“This happened during one of the first days of the war. When the bombs started to fall on the main cities, she grabbed one of her medical bags just in case, before she went and hid in the shelter with everyone. This woman went into labour and she jumped into action,” Syvytska added.

Women of all ages have joined together to fight the Russian invasion, which anthropology professor Alexia Bloch sees as a little bit of history repeating itself on International Women’s Day.

“On March 8, 1917, women took to the streets to demand the end to food shortages and the end of (the Second World War). It was a women’s movement calling for the end of war in 1917, that firmly established March 8 as International Women’s Day,” According to Bloch, professor and head of the anthropology department at UBC.

“So this is what the Ukrainian women today are doing, in a way, as we talk about this on International Women’s Day, they are organizing to be part of a resistance of a new Russian Empire,” Bloch added.

The United Nations’ theme for International Women’s Day this year is “gender equality today for a sustainable tomorrow,” with the goal of recognizing women who are trying to make the world a better place. – WhatALife!