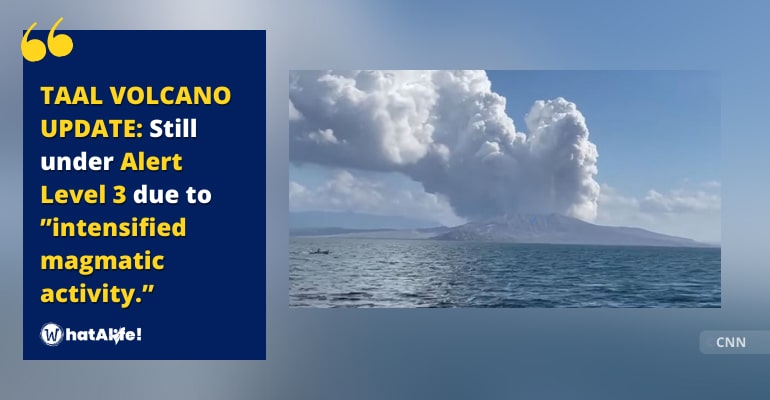 BATANGAS, PHILIPPINES — Local officials have urged around 5,000 people from the towns of Agoncillo and Laurel in Batangas province to stay in evacuation shelters after the Taal Volcano was raised to Alert Level 3 following a “phreatomagmatic” explosion early Saturday.

The volcano is still on Alert Level 3, which means there is still “intensified magmatic activity,” according to Phivolcs, who warned of possible explosive eruptions and ashfall.

According to Venus de Villa, the chief of the Laurel disaster risk reduction management office, the town had 1,670 individuals, or 473 families, in six evacuation centers, plus another 1,187 people, or 268 families, who sought shelter in the homes of relatives or acquaintances.

As of 1:30 p.m. on Sunday, the Agoncillo Disaster Risk Reduction and Management Office stated that 661 families (2,239 people) were evacuated from Banyaga and Bilibinwang, two high-risk villages, and transferred to nine shelters. The communities are within a 7-kilometer danger area around the volcano.

Authorities are continuing to conduct preventive evacuations and restricting entrance into the Taal Volcano Island and the holding activities in the vicinity of Taal Lake.

“They will remain in evacuation centers until such time that the alert level is down from 3 to 2,” Agoncillo Mayor Daniel Reyes said. – WhatALife!