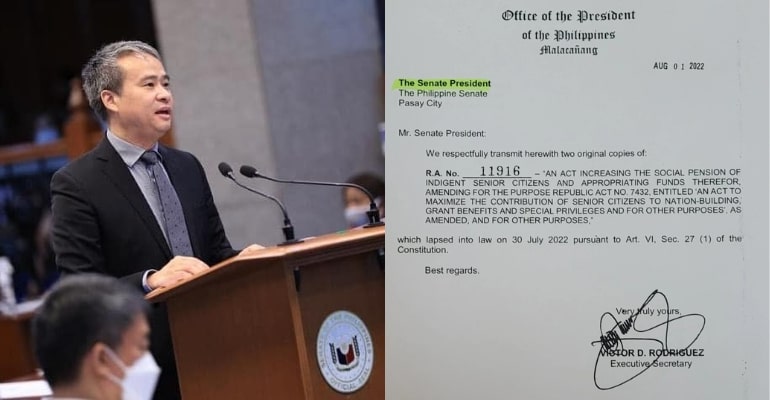 MANILA, PHILIPPINES — A bill has been passed to increase the social pension of indigent senior citizens.

“Happy birthday! Praise God!!! We are now doubling the social pension of indigent senior citizens. Thank you, thank you,” the senator, who is celebrating his birthday, said in a message to reporters.

The measure doubles the monthly pension of impoverished senior citizens from Php 500 to Php 1,000.

Earlier, Senator Villanueva remarked that the P500 monthly pension allocation for the indigent elderly is insufficient to cover their everyday needs and medical expenses.

Aside from cash distribution, to make it more accessible for older residents will offer other payout alternatives.

According to the law, the beneficiary will not cover transaction fees.

The measure also moves the implementation, distribution, and management of senior citizens’ social pensions from the Department of Social Welfare and Development (DSWD) to the National Commission of Senior Citizens (NCSC) for three years.

In May, the Senate adopted the proposed Act Increasing the Social Pension of Indigent Senior Citizens and Appropriating Funds on the third and final reading. – WhatALife!/Brix