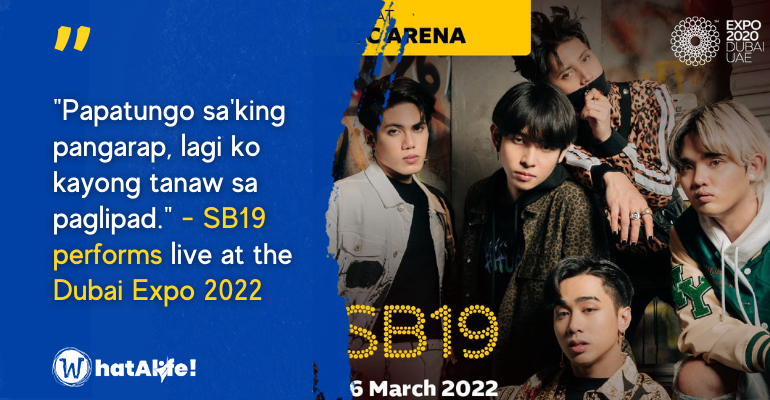 The tickets were almost sold out in less than 24 hours after the announcement of the group’s concert. Gold tickets were sold first compared to silver tickets.

The announcement posted by the group on their official Facebook account with a poster hyped all of their fans for another milestone achieved by their favorite boys.

The members – Stell, Pablo, Josh, Justin, and Ken, received a warm welcome from their supporters after they landed at the International Airport of Dubai.

The airport was full of the group’s fans waiting for autographs and pictures.

In a tweet, the crowd went wild after they saw the members of SB19.

“And the crowd goes wild.hihi,” says one fan.

The group is known for their tracks entitled, ‘Bazinga‘ and ‘Hanggang sa Huli.‘ They also won numerous international awards. In fact, SB19 is the first Filipino group and Southeast Asian act to be nominated for the Top Social Artist category at the Billboard Music Awards.

P-pop girl group BINI will also collaborate with SB19 for Pnoy Big Brother’s theme song ‘Kabataang Pinoy.’ It will be the first collaboration of both popular P-pop groups, which is considered one of the leading acts in modern P-pop. – WhatALife!