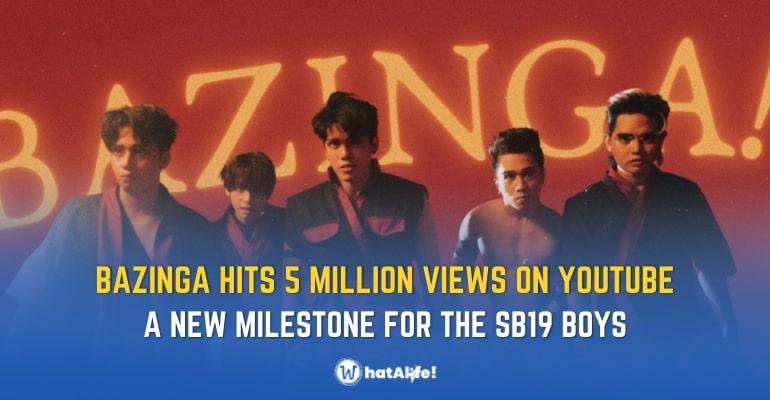 The Filipino group made a celebration for another milestone on their social media account. The boys thanked fans for their support that made them reach this achievement in less than five months.

“Thank you for getting the Bazinga MV to 5 Million Views!”

“Bazinga” trends with Twitter mentions amounting to 9.3 million in the tracking week from January 14 to January 20 of 2022.

The track continued momentum after its official music video premiere last October 2021, with the following group performance at the 34th Awit Awards for the song last November 2021.

The sensational group also made a performance for the song at a digital music festival called BYE2021 for New Year’s Eve. They also gave group participation during the ASEAN-Korea ROUND Festival last January 19, 2022.

SB19 also expressed their gratitude to their fans on their Twitter account for the garnered 100,000 views on Youtube for their collaboration with BINI for the official theme song Kabataang Pinoy of Pinoy Big Brother. The tweet has an attached caption,

Their single trending song was No. 1 in the Billboard’s Hot Trending Songs chart for weeks last January 29.

It surpassed the well-known Korean group BTS on their song entitled “Butter” from its six-week run on the chart.

Capital One is sponsoring Billboard’s Hot Trending Songs charts. The charts are based on Twitter to track the global music-related conversations and trends in real-time across the platform. – WhatALife!