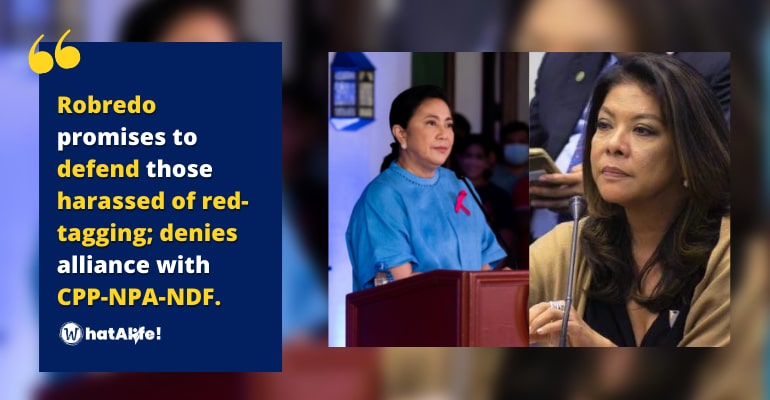 MANILA, PHILIPPINES — Presidential candidate VP Leni Robredo declared on Thursday that she would not support anyone who uses violence to push their agenda.

(The aim of the nonstop red-tagging of myself and our volunteers is clear: to stop our People’s Campaign from gaining momentum.)

Robredo promised that she, her campaign team, and volunteer lawyers will defend persons who have been harassed because of red labeling.

(I am here with the entire campaign team, especially our volunteer lawyers, to defend you against the harassment that is widespread red-tagging against our volunteers.)

Undersecretary Lorraine Marie Badoy, the spokesperson for sectoral concerns and communications for the National Task Force to End Local Communist Armed Conflict (NTF-ELCAC), previously stated that Robredo has formed a “tactical alliance” with communist terrorists that is “mutually beneficial to both of them.”

Badoy claimed that during Robredo’s March 4 campaign rally in Cavite, the Vice President shared the stage with communist “operatives.”

“VP Leni Robredo’s camp should stop insulting the intelligence of the Filipino people by pretending they have not made a pact with the devil, the communist terrorist CPP-NPA-NDF,” she said.