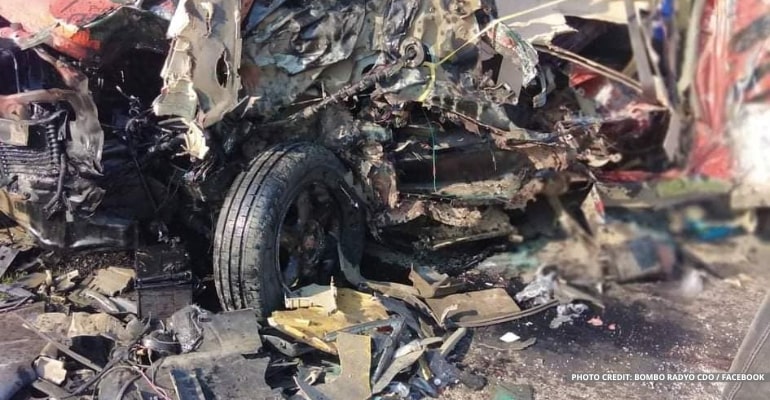 CAGAYAN DE ORO CITY, PHILIPPINES — On Tuesday, September 12, a trailer truck and a Starex van collided on the national highway in Baliwagan, Balingasag, Misamis Oriental, at 3:30 p.m.; four people were killed, and some were injured.

Villamor reported that the van driver was killed upon collision, while the two people in the truck sustained injuries. Medics brought the latter two to Misamis Oriental Provincial Hospital in Balingasag for immediate medical treatment.

Meanwhile, another injured person on board the van was Meriam Veras Esperat, 51, married and the mother of the van driver. She was also injured and brought to the hospital to be treated. The only unhurt was Rosalino Cahanap, 60, a widower resident of Ambakon Las Nieves, Agusan del Norte, Villamor added.

Balingasag Police Station chief Police Major Teodoro de Oro said in an interview that according to investigation, the truck and van were speeding when they collided on the curved part of the national highway. Due to the collision’s strong impact, the van’s occupants were stuck, resulting in the death of four victims.

Villamor added that according to the initial vehicular traffic investigation, the white-colored trailer truck, plate No. KEE973 was traveling on his lane from Butuan City heading west, going to Tagoloan, Misamis Oriental, while the orange-hued van, plate no. KEG 531 was coming from the opposite direction heading east to Surigao City.

Upon reaching the Balingasag part of the national highway, the van suddenly swerved and encroached the lane of the oncoming trailer truck. The truck plowed into a house, but no one was injured.

At the moment, the truck driver Roy Decio is in police custody. –WhatALife!/Zed