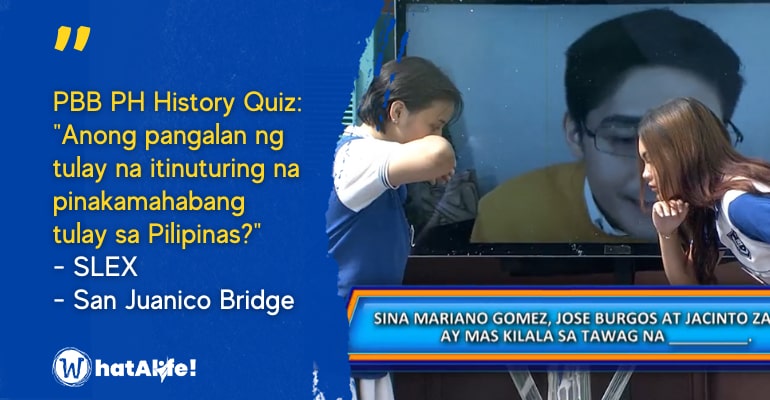 MANILA, Philippines — PBB trends on social media after an episode of its Philippine history quiz bee hosted by Robi Domingo. Check out why it trended below.

In the episode posted by the show on April 10, 2022, the teen housemates participate in a series of history quizzes.

Watch the episode below:

In each of the rounds, Robi Domingo asks participants historical questions that they need to answer to have a point for their team.

Round 1: Maxine and Paolo

The first round is for Maxine and Paolo, where they have questions such as,

(What are the colors found in the flag of the Philippines and how many are there?)

Paolo answered it correctly by saying “4.”

Round 2: Eslam and Rob

(The Mother of the Katipunan, Melchora Aquino, is also known by the nickname?)

None of the participants got the correct answer ‘Tandang Sora,’ as Rob wrongly answered by saying ‘Ninoy Aquino,’ while Eslam answered ‘Nanay ng Bansa.’

Eslam got the point by answering “3.”

The last question for the second round was, “Sinong Philippine president and nasa 20 peso bill at coin?”

(Who is the Philippine president on the 20 peso bill and coin?)

Eslam again got the point with his answer, “Manuel L. Quezon.”

Round 3: Kai and Gabb

The round that went to the top trending topic on Twitter with the tagline ‘GomBurZa,’ is the third round for Kai and Gabb.

(Dr. Jose Rizal is known by his nickname?)

Kai pressed the buzzer first and answered, “Jose.” Gabb then got the correct answer by saying, “Pepe.”

The next question for the round was, “Anong pangalan ng tulay na itinuturing na pinakamahabang tulay sa Pilipinas?”

(What is the name of the longest bridge in the Philippines?)

The last question given to them was, “Sinong bayani ang nasa 5 peso coin?”

The trending topic “GomBurZa” came up when Robi asked the contenders

Neither of the representatives got the right answer, instead guessing on the names presented on the screen – Kai answering “Marjo” and Gab “Majoha.”

Final Round: Ashton and Dustine

(The Spoliarium is the work of this famous artist, who is he?)

(Give the title of the two well-known books of the national hero Dr. Jose Rizal?)

(This place is located in Manila, it is known as the ‘Walled City.’)

(‘Jasminum Sambac’ is better known by what name?)

The final question for the round was, “Saang bayan sa Laguna ipinanganak si Dr. Jose Rizal?”

(In what town in Laguna was Dr. Jose Rizal born?)

Despite the winning moment for Team Dustine, the netizens are not happy with their performance as most of the questions are easy and are basic Philippine history that everyone must know and remember.

The most trending topic “GomBurZa” earned a lot of attention when Kai and Gabb guessed based on the names presented.

The answer “SLEX” also gained much attention as an answer for the longest bridge in the Philippines.

Due to the disappointing event that happened during the episode, the people are tweeting and tagging DepEd to open the schools.

Meanwhile, others have gone to memes to express their reaction.