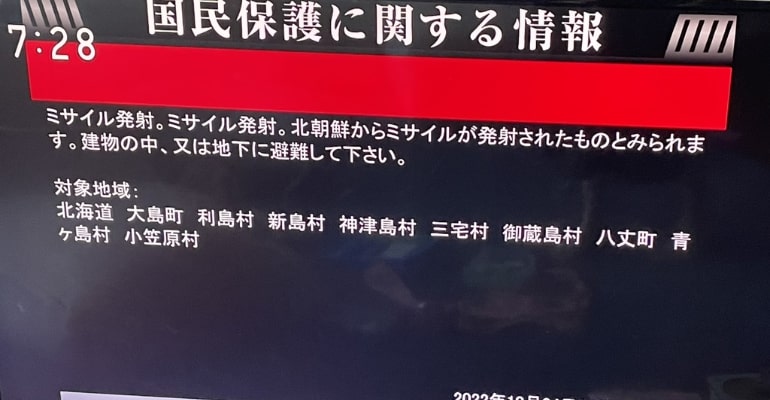 North Korea has fired a missile, flying over Japan and landing in the Pacific Ocean. The longest-range missile test of North Korea is the first to be sent over Japanese territory since 2017.

Japan activated its J-Alert system to residents on Tuesday, October 5, to take shelter and go underground as a North Korean missile flew over the northernmost main island of Hokkaido. A few trains also temporarily stopped operations due to the event.

“North Korea appears to have launched a missile. Please evacuate into buildings or underground,” the alert read.

Watch a video taken by a resident in Japan below:

The weapons test conducted by Kim Jong-un’s regime was the first after 5 years.

South Korea’s joint chiefs of staff (JCS) reports that the projectile appeared to be an intermediate-range ballistic missile. It flew about 4,000 km, a range that puts Guam, a US Pacific Territory, within striking distance.

The prime minister of Japan, Fumio Kishida, called the event “outrageous,” noting that the government would continue gathering and analyzing information.

Meanwhile, Defence Minister Yasukazu Hamada said Jpana would examine all options to strengthen its defences in response to the repeated launches from its neighboring country. This includes counterattack capabilities.’

Yoon Suk-yeol, South Korea’s president, expressed a warning of a “resolute” response after the launch. The country’s unification ministry, which oversees cross-border issues, reported that North Korea was “unresponsive” on the inter-Korean hotline.

The national security of South Korea said that the North’s provocations would “only strengthen security cooperation with the US”, South Korea’s main ally.

In response to the missile launch, South Korean and US fighter jets carried out a “precision bombing drill,” dropping joint direct attack munitions at a target in the Yellow Sea.

The missile test followed a few days after the high-profile visit of Kamala Harris, US vice-president, to the fortified border between the Koreas. – WhatALife!