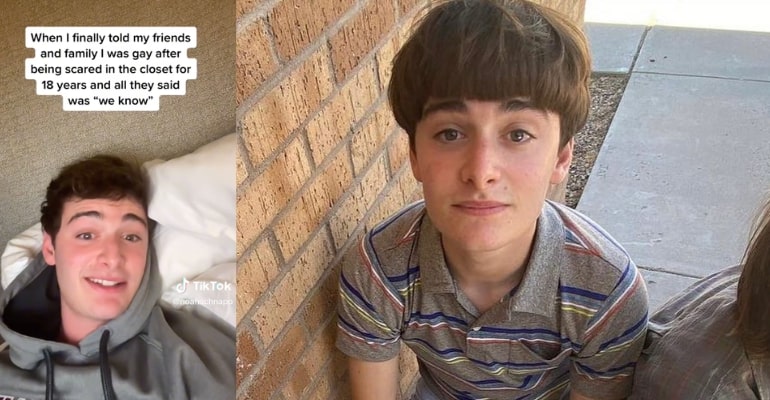 HOLYWOOD, USA —  In a quick, hilarious video on Tiktok, Noah Schnapp comes out to the world as gay.

In an eight seconds video, the Stranger Things star shared the hilarious reaction of his loved ones when he finally came out of the closet at 18.

“When I finally told my friends and family I was gay after being scared in the closet for 18 years and all they said was ‘we know,'” the actor added the text to his video.

Schnapp appropriately lipsynced to the sound that says, “You know what it never was? That serious. It was never that serious. Quite frankly, it will never be that serious.”

“I guess I’m more similar to Will than I thought,” he captioned, referring to his Stranger Things character Will Byers, who he confirmed as gay last year during the previous season.

In the fourth season of the world-famous Netflix show, Will Byers appears to have a crush on his best friend, Mike Wheeler (played by Finn Wolfhard).

Schnapp also told Variety last July that “it’s 100% clear that [Will] is gay” and how the character was struggling with his feelings throughout the show.

Meanwhile, the actor’s comment section is filled with support from fans and co-actors alike.

I guess I’m more similar to will than I thought

“NOAH SCHNAPP” is also trending on Twitter as fans bring the news on the social media site.

“The way Noah Schnapp just publicly came out via tiktok and had this as his caption an icon,” tweeted user @charlottes0phia.

“noah schnapp being gay makes so much sense because a straight person would never have been able to film this scene as well as he did,” said @cutesope.

We are so proud of you, Noah! – WhatALife!