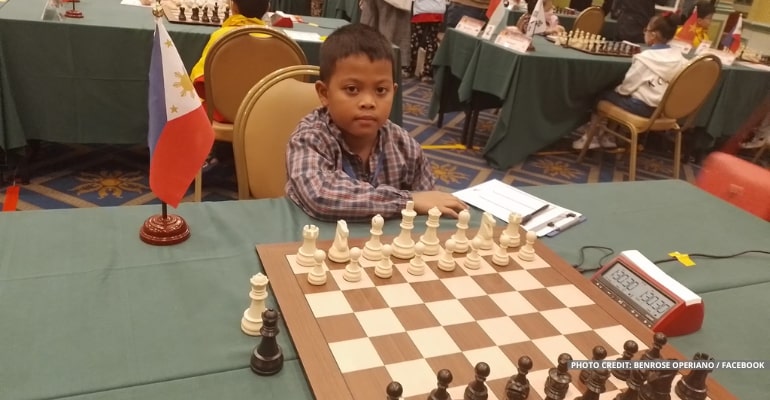 BANGKOK, THAILAND — Bince Rafael Operiano from Busac village in Oas, Albay, represented the Philippines in the 6th Eastern Asia Youth Chess Championship that ran from November 4 to 12. The nine-year-old Grade 3 pupil in Busac’s San Isidro Elementary School was hailed as the champion of the international event.

Bince Operiano competed in the 6th Eastern Asia Youth Championship Standard Rapid Blitz (U-10) held in Bangkok, Thailand. Even with 29 contenders from different countries as his opponent, he dominated the competition, advancing through nine rounds and finally winning the gold medal on the last day.

Rosemary Roblico Operiano, 33, and Ben Operiano, a security guard, are the proud parents of Bince.

“We are very proud of his achievement; the glory is not just for us but for the country,” Bince’s mother said.

When Bince was 5 years old, Ben taught him how to play chess; it became their father-son bonding and entertainment. Their home did not have a television set or any electronic gadget, so they had to make do with what they could.

Before joining the international chess competition, Bince Operiano was a consistent winner in local chess tilts. When he was just 6-years-old, he won the National Age Chess Group Kiddie category held at the Albay Astrodome.

Bince started competing even without proper training or a coach when he was still 6 years old. The first competition he attended was at Albay Astrodome in Legazpi City under 8 boy category, where he was declared the champion in 2020.

However, joining the competition was tough and full of challenges due to their financial situation, as Ben is the only one earning money for their family.

Bince’s parents sought sponsors for his trip to Thailand, as they could not afford the plane tickets and other expenses. His mother said they were almost unable to send Bince to Thailand because of a lack of funds. Her son almost had to go alone without his father because their budget was insufficient for another plane ticket.

However, they sourced funds by soliciting from friends and local officials, and fortunately, help poured into helping out Bince, who was determined to win when he learned that his father would be watching the games.

Frayna’s support allowed Bince to join the tournament of the National Chess Federation of the Philippines that same year.

Rosemary was thankful that Bince received help and support, which allowed him to join and win various competitions. – WhatALife!/Zed