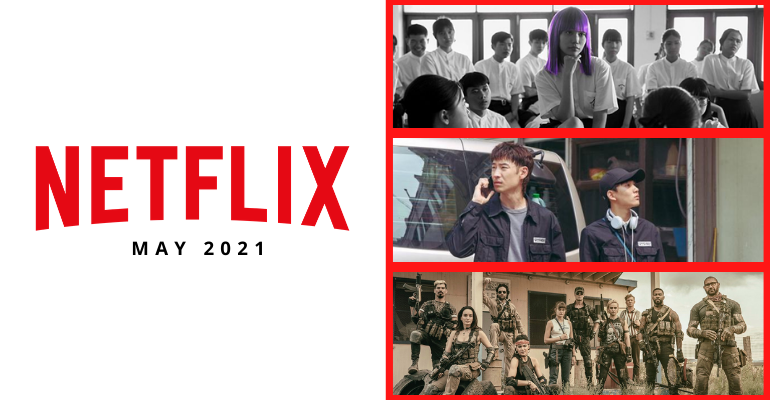 April is ending soon, and you know what that means. Time to update your watch list with these new titles coming in Netflix Philippines this May 2021, including the second season of our mysterious and cunning girl Nanno from Girl From Nowhere to the heartwarming Netflix Korean original series Move to Heaven.

Ready? Check out the complete list of TV shows and movies below!

May 7: Jupiter’s Legacy is an American superhero series that follows the story of the world’s first superheroes who received their powers in the 1930s. Years later, as these first-generation superheroes became the revered elder guard, they faced the challenge of guiding their superpowered children who struggle to live up to their legendary feats.

May 7: Girl From Nowhere (Season 2) follows the story of “Nanno,” a mysterious girl who transfers to a different school each time to avenge victims of bullying. The first season premiered in 2018 on Netflix.

May 8: Mine is an upcoming K-drama series that revolves around the mysterious lives of rich and high society people who chase and collect their ‘mines’ in life.

May 9: Super Me is a Chinese fantasy, rags-to-riches film about a struggling screenwriter who discovers his lucrative ability to bring antiques from his dreams into the real world.

May 12: Oxygen follows the breathtaking escape of a woman trapped in a cryogenic chamber with no memory and only 90-minute worth of oxygen.

May 12: Dance of the 41 – Based on a true story, the Dance of the Forty-One (Spanish: El baile de los cuarenta y uno) is about a society scandal in early 20th-century Mexico that follows a secretly gay congressman who marries the Mexican president’s daughter. Soon, however, was discovered that he was cavorting with a young man at a private party.

May 14: The Woman in the Window is an upcoming American psychological thriller-horror film based on the 2018 novel of the same name by pseudonymous author A. J. Finn. The film revolves around an agoraphobic psychologist who witnessed something she shouldn’t from her seemingly picture-perfect neighbors across the street.

May 14: Move to Heaven follow a young man with Asperger syndrome and his uncle who works as trauma cleaners. Based on a true story, the series will highlight the life of trauma cleaners, those who clear out the possessions of dead people, uncovering the stories they left behind and telling them to loved ones.

May 14: Haunted (Season 3) – the third installment of the chilling true-horror series featuring more people who claimed to have experienced supernatural events such as ghosts, poltergeists, and cults.

May 19: Who Killed Sara? (Season 2) – the second installment of Mexican thriller following fictional protagonist Alex, who is hell-bent on exacting revenge and finding the real culprit after being framed for his sister’s murder.

May 21: Army of the Dead – a group of mercenaries plots a heist on a Las Vegas casino during a zombie outbreak.

May 24: Mad For Each Other – Bothered to realize they are next-door neighbors and share a psychiatrist, a man and a woman find it’s impossible to stay out of each other’s way.

May 27: Eden – a new Japanese anime series, directed by Yasuhiro Irie of Fullmetal Alchemist and concept designer Toshihiro Kawamoto of Cowboy Bebop, set 1000s of years into the future. By then, only robots have been existing when all of a sudden, a young human girl entered their city and disrupted their world.

Dates To Be Announced

Halston (limited Series) – an upcoming miniseries based on the life of designer icon Halston.

Racquet Boys – another K-drama addition in the streaming platform following the growth of sixteen boys and girls and the challenges faced by badminton club of their school.

Note: Dates and titles are subject to change