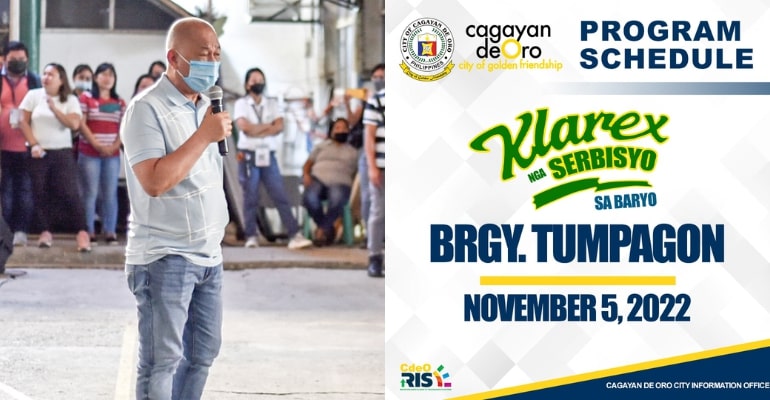 CAGAYAN DE ORO CITY, PHILIPPINES — On Saturday, November 5, during the ‘Klarex nga Serbisyo sa Baryo’ outreach program, Mayor Rolando “Klarex” Uy urged the residents of barangay Tumpagon and nearby areas to take advantage of the basic services of the city hall that they serve on weekends.

Some of the services provided at various offices and offices in the city hall are free check-ups and medicine, tooth extraction, children’s registration, vaccination of animals, fruit and vegetable seeds distribution, Covid-19 vaccination, the redemption of cedula, business, and building permit applications, wedding ceremonies, and many others.

Meanwhile, the ‘Kasalan ng Bayan’ on November 5 provided fun and entertainment to the public. Mayor Klarex himself will preside over the wedding ceremony for couples who have been living together for several years.

As a congratulation from the mayor, each couple received a Lechon, cake, and wine, in addition to a gift given by ‘Liga ng mga Barangay’ President Kagawad Yan Lam “Alam” Lim. He gave gifts so that the newlywed couples could have a small party after they return to their respective homes.

On Friday afternoon, November 4, the volleyball match between the men’s teams of the CHUDD versus CEED commenced at the City Hall quadrangle.

CHUDD (City Housing Urban Development Department) and CEED (City Economic Enterprises Department) battled against each other; however, the CEED spikers dominated the highlights of the match.

The volleyball game on Friday afternoon is part of the ongoing Cagayan de Oro City Hall sports fest that’s seen to run well into December. The city hall inter-department sports fest is finally back in action this year after more than two years inactive in sports fests due to the pandemic.