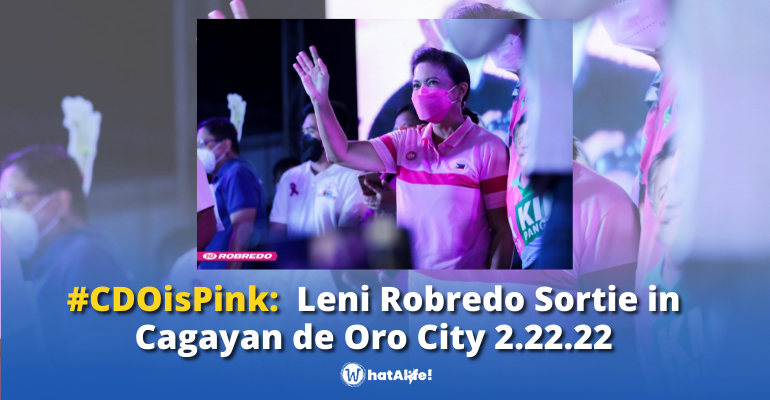 Before her arrival at the set stage in Plaza Divisoria, she first made her way around the city, accompanied by CDO Mayor Oscar Moreno.

While waiting for VP Leni Robredo and her lineup to arrive, the program started at around 4:30 in the afternoon. Atty. Ernesto Neri was called on stage to interview the five sectoral representatives that support the Leni-Kiko tandem. These are people from the transport sector, the academe, the youth sector, the farmer’s sector, and the fisherfolks sector.

At 5:50 pm marks the arrival of the senatorial lineup under the Leni-Kiko Tandem such as Dick Gordon, Teddy Baguilat, and Alex Lacson. Each of the senatorial aspirants gave their solidarity messages and clear outlines of their campaigns, from commerce, jobs, education, environmental agenda, LGBTQ+ support, education and more.

Representatives of senatorial candidates Risa Hontiveros, Sonny Matula, Leila De Lima, and Chel Diokno also shared solidarity messages for their candidates who were not in attendance.

Many volunteer sectoral groups made their performances before the arrival of VP Leni Robredo. For instance, one performance is from the LGBTQ+ supporters, with two drag queens performing a Lip Sync Challenge that is famous in RuPaul’s Drag Race – an American reality competition TV show.

A few provincial board members of Misamis Oriental also showed up at Plaza Divisoria to support the Leni-Kiko Tandem. These are Maricel Casiño Rivera, Oliver Ubaub, Jesus Jardin, Jun Macasarte, and Bernard Benavidez.

At around 7:15 pm, Leni Robredo finally arrives at the Plaza Divisoria stage with Mayor Oscar Moreno.

The Mayor gave his own solidarity message and was tasked to officially introduce the presidential aspirant. Oscar Moreno is also set to run for governor in Misamis Oriental with running mate former congressman Ariel Hernandez.

By 7:30, VP Leni Robredo makes her speech to the Kagay-anons. She mentions her previous visits to CDO as well as her promise through her official campaign motto, “isang gobyernong tapat para aangat ang buhay ng lahat.”

The presidential aspirant proceeds to thank and read supporters’ names in placards and tarpaulins, then ends her statement at 7:45 pm by once again endorsing her senatorial slate and the governor aspirant Mayor Oscar Moreno.

The event was also streamed live on the Vice President’s official Facebook Page.

The #CDOisPink becomes a nationwide trend on Twitter as supporters of VP Leni Robredo share their highlights of the event.

“Just saw the rally of #MadamPresident Leni at CDO. The energy of the people there was like they were watching a rockstar #CDOisPink,” says one tweet by a supporter.

Just saw the rally of #MadamPresident Leni at CDO. The energy of the people there was like they were watching a rockstar #CDOisPink

Some also shared drone shots of the crowd:

For updates, you may check out this post: #ElectionWatch2022: Schedule of campaign activities of the national candidates.