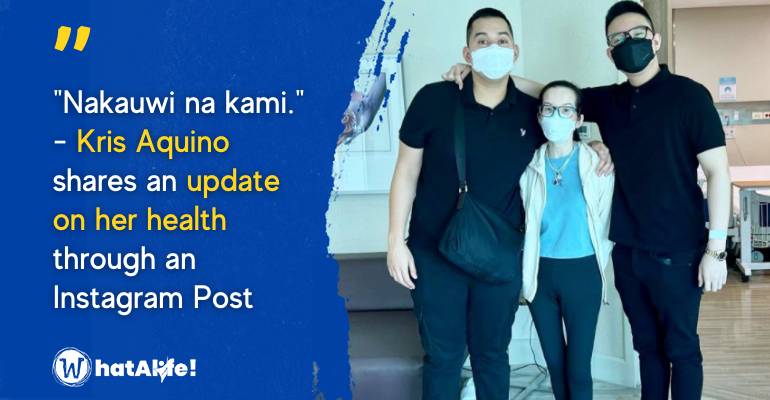 MANILA, PHILIPPINES — Kris Aquino, known television personality, host and actress, shared an update about the positive developments to her health through an Instagram post.

Kris Aquino shared a post update on Monday, March 14, in her Instagram with a caption, “Nakauwi na kami…” The actress posted the caption together with her two sons, Josh and Bimby.

“Nakauwi na kami (we are home)… this was our last pic before heading to our temporary, leased home… maghihintay na lang (just waiting) for my bone marrow test results. Super blessed to have the LOVE and concern from these 2 giants, through them binigay ni God (God gave) so much more than I could ever deserve.”

Kris had five health issues as per her diagnosis last 2018. These are severe migraine, fibromyalgia, chronic spontaneous urticaria, hypertension, and overproduction of thyroid antibodies.

Currently, the 51 years old actress-host has a rare autoimmune disease that is making her health worse than before.

Based on the CT scan result, it shows no development of tumors. And the findings of her upper endoscopy indicate that she has erosive gastritis and gastric ulcer.

False information or “fake news” spread last January about Kris being in a hospital and in critical condition.

The television personality dismissed the false information that made the people shocked and worried.

Kris keeps her health condition public to avoid any misconceptions and misunderstandings. The actress-host expresses her gratitude to her supporters and friends for their unending support and concern. – WhatALife!