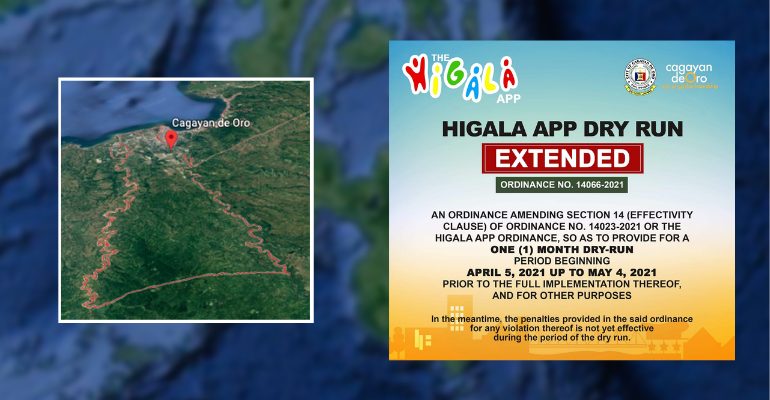 The 19th City Council of Cagayan de Oro (CDO) has approved Ordinance No. 14066-2021, extending the Higala App Dry Run until May 4 this year to give establishments time prepare and comply with the mandated system.

“An ordinance amending section 14 (Effectivity Clause) or Ordinance No 14023-2021 or the Higala App Ordinance, so as to provide for a one (1) month dry-run period beginning April 5, 2021 up to May 4, 2021, prior to the full implementation thereof, and for other purposes,” it read.

Moreover, the decision came after the CDO Chamber of Commerce and Industry (Oro Chamber) submitted a position paper to ask local officials to review the QR code ordinance.

Councilor George Goking said the Oro Chamber’s opposition pressure the City Council on Monday, April 5, to move the full implementation of the Higala App Ordinance from April 7 to May 5.

While City Mayor Oscar Moreno had wanted the ordinance to be fully implemented this month to ensure faster contact-tracing work, the Oro Chamber has questioned the city law.

Vegafria said the ordinance contradicts the order of the Inter-Agency Task Force on COVID-19 on the use of the StaySafe.ph app, “which is wider in scope and easier to access and use unlike the Higala app.”

He said nonresidents of Cagayan de Oro are required, based on the city law, to register through the Higala app, and “the penalties for violators are superfluous.” In the ordinance, establishments that failed to comply could lose their permits to do business in the city.

The group argued that the Higala app is not widely used, and neither has it been integrated into the StaySafe app system.

Reads part of the Oro Chamber’s position paper: “With the pandemic, the businesses will have to swallow the bitter pill of refusing prospective customers who cannot show their QR codes, and worse, even if they show their StaySafe QR codes, which is not integrated in the Higala app… they will still be refused entry.”

It added, “It is very hard to access due to the lack of adequate IT infrastructure when it was developed,” and “uses an unsecure site which is vulnerable to data hacking and theft and may be subject to abuse since the data are not encrypted.”