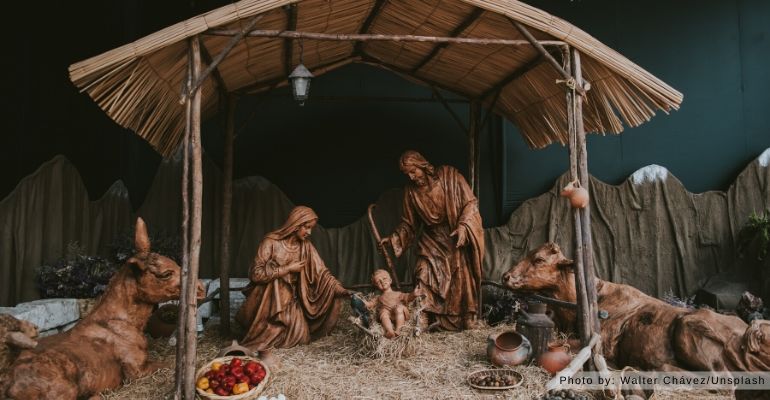 Simbang Gabi (“Night Mass” in Tagalog) begins on the 16th of December and ends on the 24th. It’s also known as Misa de Aguinaldo, referencing the mass as a gift offered to Christ. Contrary to Simbang Gabi’s masses during dawn, the final mass called Misa de Gallo (“Mass of the Rooster” in Spanish) is celebrated on Christmas Eve.

As a part of this tradition, in churches, the Belen (nativity scene), features Saint Joseph and Mother Mary beside Jesus in a manger surrounded by lights, shepherds, and animals. Other versions also showcase the star of Bethlehem that acted as a guide for the three wise men with their gifts.

This tradition began in 1668

When our country first experienced the practice, along with many others, brought by religious missionaries. Introduced by Spanish Friars, the tradition of hearing mass was scheduled at the break of dawn to allow farmers to attend mass before they tend to their crops and animals. This made it easier for them in contrast to participating at the end of the day when they were most often worn out. Fishermen could also reel in their fish caught for the day beforehand.

However, Manila Archbishop Felipe Pardo implemented a Vatican decree, rendering Filipinos unable to attend Simbang Gabi for 9 years (1680-1689). The decree was also issued and implemented in Spain and Mexico and was done to prevent choirs and churchgoers’ from singing lyrics of Christmas songs in their own languages as this was seen as perverse. Mass services were also suppressed because of this. Clergymen, except Discalced Franciscans, continued to do so after Pardo’s death.

Catholic Filipino’s dedicate these nine masses to honoring the Virgin Mary, God’s expectant mother, and preparing for Jesus’ coming. In addition, Pope Sixtus V (1521-1590) included these additional intentions: 1. Glorifying Holy Mother Church; 2. Having the True Faith of the newly baptized natives preserved and; 3. Spreading the Holy Catholic Faith. Filipinos are also called on to use this time as a time to reflect on challenges encountered and pray for healing the nation. Finally, churchgoers are invited to give thanks during this solemn celebration.

Simbang Gabi is prevalent in communities of faithful Filipinos around the world. However, instead of the typical 4 AM or 5 AM masses, it’s even heard by Filipinos at 8 PM or 9 PM to cater to employees, students, and other community members who may be unavailable in the morning. This year, the Filipino community is busy preparing for the first time that Simbang Gabi will be led by the Pope at St. Peter’s Basilica in Vatican City. Auditions were conducted to determine who would sing at the Mass which had approximately 7,500 expected participants.

Furthermore, the tradition goes beyond the celebration of mass. Filipinos also come together at the end of each session to eat different kakanin (a combination of kain and Kanin (“eat” and “rice” in Filipino), as well as other sweet food treats. And while these delicacies often come as a commercialization scheme that’s complementary to the tradition, Fr. Jerome Secillano stated that “People are not forced to hear Mass yet for nine days, they flock to churches with a feverish demonstration of religiosity.” He affirmed that this is enough proof that the tradition has not become too commercialized and that its religious symbolism still stands.

You Might Also Want To Check Out: IN PHOTOS | Oro Gaston park glows in merry this holiday season

According to Fr. Alejandre Vergara, SOLT, “There is an atmosphere of joy that motivates us to keep and hold on to our faith that we may persevere in our lives.” For the same reason, many believe that when you complete these series of masses, your requested blessings or wishes from the Lord will be granted. However, Manila Auxiliary Bishop Broderick Pabillo called on priests to clarify this popular misconception. Parishioners, along with the faithful, are reminded that dawn masses were never supposed to be attended for this reason. Instead, Pabillo explained that“The nine days is a manifestation of the people’s persistence. Imagine you will wake up early for nine straight mornings… It is a sign of your love of God.”

The Jaro Cathedral Parish also said that “It is a significant moment not only because it strengthens relationships among family members or among friends but also because it is the time when our faith is intensified.” Moreover, Secillano reminded the faithful to pray for the country, peace, unity, and reconciliation as well.

During a Simbang Gabi mass, the presider wears a white vestment. However, since the days leading up to Christmas are still part of the Advent season, they use purple vestments during the other Masses for the day.