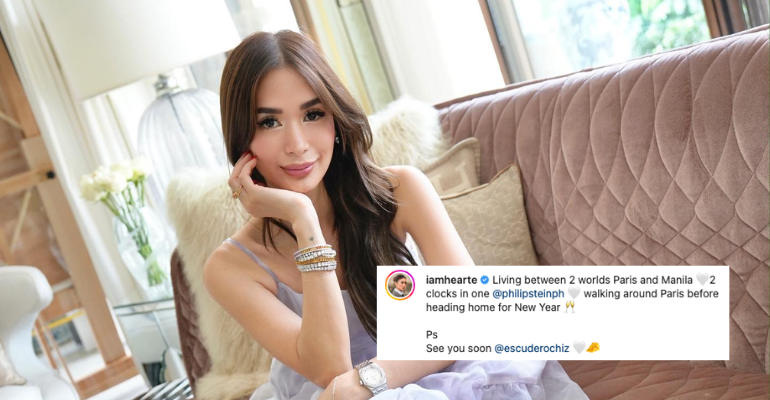 Amidst breakup rumors with her husband, Heart Evangelista tagged Senator Chiz Escudero on an Instagram post, announcing that she will be returning home for the New Year. She is currently in Paris, staying at her newly-bought Paris apartment.

The post went viral due to her postscript, “See you soon @escuderochiz.” Fans were in a frenzy since the international model did not clear the surrounding breakup rumors.

Previously, Evangelista said she was “going through a lot of personal stuff”. She then rented an apartment in Paris afterwards, further igniting separation rumors.

The Kapuso actress has been busy in Paris with various fashion photo shoots, especially during Paris Fashion Week. She was even described as the perfect muse by Victoria Beckham for her brand during the said event.

Evangelista was also introduced as the face of the luxury watch brand Philip Stein last December 8, 2022.

In one of her vlogs, Evangelista shared she was going through some personal problems. She then moved to Paris, which fueled rumors of her breakup with her husband, Senator Chiz Escudero.

Both party neither confirmed nor denied the gossip. However, fans were quick to notice how the actress removed the name “Escudero” from her Instagram username.

On the topic of her Paris apartment, the international model recently had an interview where she shared her excitement about decorating her apartment with the famous Barnaba Fornasetti, owner of Fornasetti, a world-renowned artistic design company that sells furniture and homeware. – WhatALife!/Vaughn