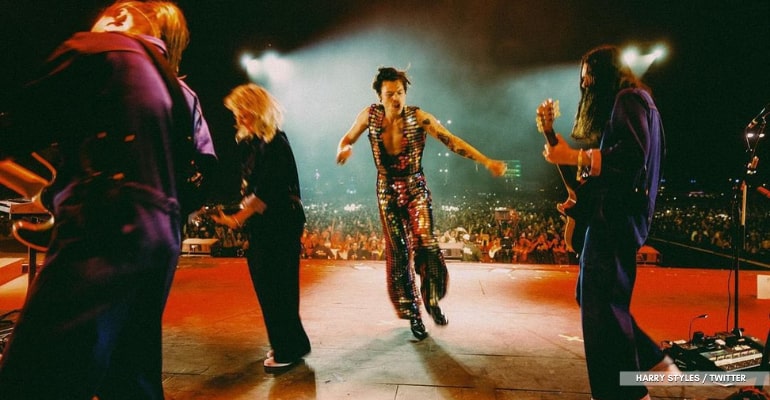 CALIFORNIA, USA — Harry Styles garnered a crowd of 100,000 people during his opening-night performance at the 2022 Coachella Valley Music and Arts Festival. At least 20,000 more also enjoyed additional performances on other stages, such as the Sahara Tent. The festival’s official capacity is 125,000 which makes the star’s performance a sell-out.

During Harry’s 90-minute set, he went to new heights in terms of his rock god persona, hitting many of the same notes on his Love on Tour trek across North America over the past few months.

The singer also included some surprises during his debut at the event as Shania Twain joined him for a duet on her hit songs, “Man! I Feel Like a Woman!” and “Still the One.”

In addition, he debuted two new songs with presumed titles “Boyfriends” and “Late Night Talking” during his performance.

According to Variety, among the front rows of the former One Direction member’s set were Apple CEO Tim Cook and SVP of services Eddy Cue, and James Corden.

His Coachella performance includes his latest trending song “As It Was.”

According to a tweet from Chart Data on April 19, Harry’s new single recently surpassed 200 million streams on Spotify and is considered the fastest male soloist song in history to reach the milestone.