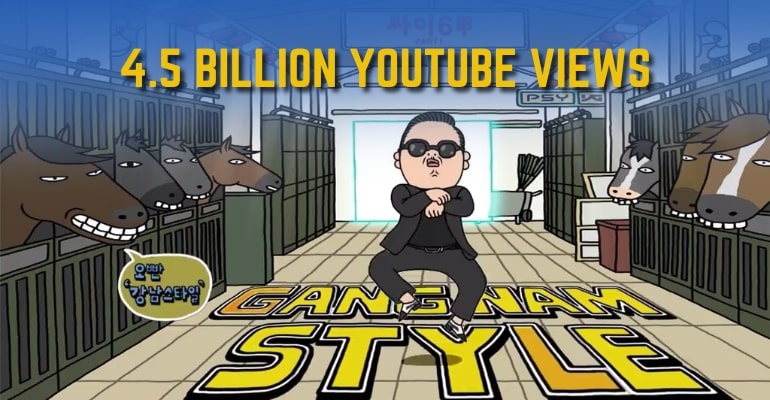 SEOUL, SOUTH KOREA — On August 4, according to Soompi, the music video for Psy’s breakout hit song “Gangnam Style” from 2012 reached the 4.5 billion mark in views, breaking a new record as the most-watched Korean-language music video of all time.

The previous record belonged to the same song, which in March became the first Korean music video to exceed 4 billion views on YouTube.

‘Gangnam Style’ still is one of the top 10 YouTube videos with the most views of all time.

On July 15, 2012, “Gangnam Style” was initially made available; it just recently marked its 10th-anniversary last month.

NME’s Rhian Daly wrote in a tribute to the song that “Gangnam Style served as an introduction to K-pop for many, curious listeners delving deeper into the Korean music scene and finding new artists they enjoyed.”

In a previous interview, BTS rapper Suga, who also worked with Psy on his most recent title hit, “That That,” acknowledged how important “Gangnam Style” was in laying the groundwork for K-success pop in western markets.

“He was always someone I felt thankful for,” Suga said.

PSY opened the way for K-pop in the U.S. with “Gangnam Style,” making it easy for other K-pop rising stars to follow in his footsteps.

Currently, PSY is the ecstatic proprietor of his label, P Nation, but he still has a deep passion for music.

He only recently released his new single, That That, which features BTS’s Suga and is already generating controversy.

It is not a surprise Korean singer-rapper Psy consistently releases hit songs, given that he is known for dancing that is unique to him and his captivating compositions. –WhatALife!/Brix