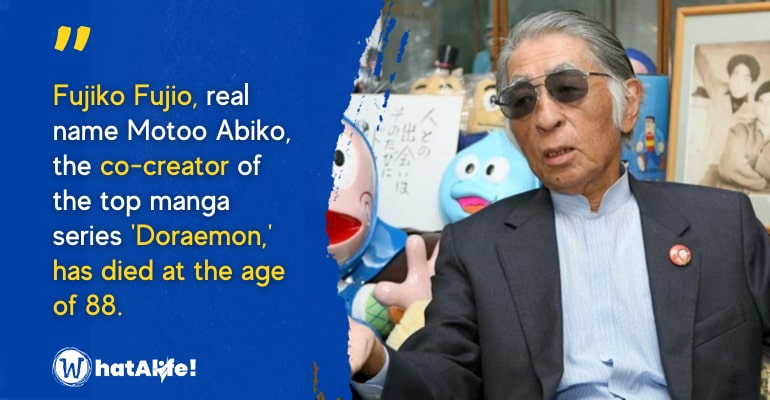 TOKYO, JAPAN — Fujiko Fujio, real name Motoo Abiko, the co-creator of the top manga series ‘Doraemon,’ has died at the age of 88. The manga artist was found dead at his home in Tokyo on Thursday, April 7.

A preliminary investigation of the police revealed no evidence that there was a committed crime, although the exact cause of death remains under investigation.

The manga and anime lovers community mourns the sudden past of the leading manga artist and honors his legacy by expressing it on their social media accounts.

“We’re sad to share that Fujiko Fujio A (Motoo Abiko) has passed away. He’ll be remembered forever through his iconic character Doraemon. Rest in peace, Fujiko. Your legacy will live on.”

In addition, the official Twitter account of Viz, with a bio, ‘President of the Anime and Manga Club since ’86!’ tweeted,

The manga series Doraemon has been popular since its release, with numerous anime adaptations. The story follows a young boy named Nobita who finds Doraemon, a cat-looking alien robot from the future who can produce a variety of objects from his pocket.

Most episodes consist of Nobita begging for something, which he inevitably misuses. – WhatALife! / Marean