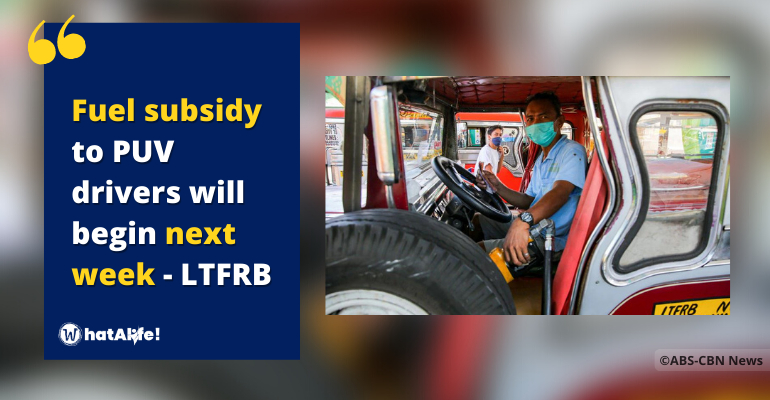 MANILA, PHILIPPINES – The Land Transportation Franchising and Regulatory Board (LTFRB) said on Thursday that it will begin distributing gasoline subsidies to public utility vehicle (PUV) drivers and operators next week.

According to Maria Kristina Cassion, Executive Director of the Land Transportation Franchising and Regulatory Board (LTFRB), around 377,000 drivers are expected to benefit from the subsidy, which will be distributed starting next week.

“Our target is to release the funds by March once the DBM downloads the funds. They said they will release the funds by this month. Immediately the LTFRB can distribute the funds to more than 377,000 beneficiaries covering public utility jeepneys, buses, UV Express vans, taxis, ride-sharing cars, and even tricycles and deliveries,” Cassion said on Wednesday

According to the DBM, selected beneficiaries can apply for the subsidy through the Landbank of the Philippines’ cash cards.

“The EDC (Economic Development Cluster) agreed to double the amount for fuel subsidy so ₱2.5B will be given this March and another ₱2.5B in April,” Canda said.

On the other hand, the DBM has also provided the Department of Agriculture $500 million for fuel discount cards to be distributed to agricultural producers.

Farmers and fishermen who possess agricultural or fishing machinery, either individually or through organizations, are said to be the beneficiaries. They can present the cards to contracted oil companies or petrol stations and receive a maximum fuel discount of P3,000, according to the company.

Also, the DA has set aside P500 million to provide gasoline discounts to farmers and fishermen who own and operate agricultural and fishing machinery individually or through a farmers group or cooperative.

Meanwhile, the LTFRB of Region 10 has announced the initial list of recipients for their FUEL CASH SUBSIDY PROGRAM via the Pantawid Pasada Card. You can see the list of names and plate numbers here in the link.

Note: This assistance is only for Public Utility Jeepneys (PUJ). – WhatALife!