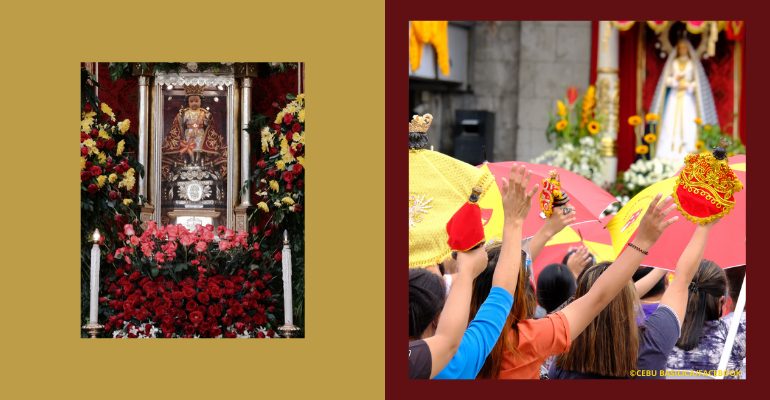 — a phrase that you hear when visiting the prestigious Sinulog Festival. Did you know that it means “Sangpit Senor” in Cebuano, meaning “to call, ask, and plead to the king”?

On every third Sunday of January, the city of Cebu, Philippines, celebrates the Sinulog Festival. Although this celebration is held mainly in this city alone, it seems like the whole country celebrates this well-known festival because people from all over the country (and even the world) visit the “Queen City of the South” just to witness this prestigious celebration. There are even mini-Sinulog Festivals celebrated in small municipalities, complete with street dancing and a float parade.

But what exactly is the Sinulog Festival, and why do we celebrate it? In this article, let us get to know the most well-known festival in the Philippines and why you should visit it in all its glory — post-COVID, of course.

What is the Sinulog Festival?

The word “sinulog” comes from the Cebuano word “sulog,” meaning “like water current movement.” This then depicts the forward-backwards movement or steps of the Sinulog dance we see performed in the streets. It is also known as Santo Niño Festival since it is held to honor the Santo Niño (Child Jesus).

Santo Niño or Santo Niño de Cebú is one of the country’s most prominent historic relics handed in 1521 from the Portuguese explorer Ferdinand Magellan to Rajah Humabon of Cebu. It is a historical event that paved the way for Christianity in the country. In fact, more than 800 people were baptized at that time.

You Might Also Want To Read: Black Nazarene Traslacion: History of devotion

It is said that upon receiving the holy image, the main consort of Rajah Humabon, Queen Juana, held the image of the Child Jesus while dancing in joy. The natives then followed her example; thus, the first Sinulog dance was born. Over the years, this event has been the basis of the following Sinulog dances.

Although, it is believed that the dance steps also originated from Rajah Humabon’s adviser, Baladhay. When he got sick, the Rajah ordered his tribe to bring his adviser to the room wherein the Santo Niño was enthroned. In a few days, the adviser was found shouting and dancing. He explained to his curious tribe how the holy Child Jesus was tickling him. With the holy Child, he danced the movements of the river — a two-step forward and one-step backward movement. To this day, this movement is still being used by the devotees of the Santo Niño who believe that it was the Holy Child’s choice to have Baladhay dance.

Shortly after the religious conversion, Magellan was killed by Lapu-Lapu, the then reigning ruler of Mactan. It was not until 44 years later that a new group led by Miguel Lopez de Legaspi came to the island and started the formal Christianization of its citizens. In those 44 years, it was believed that the natives continued to dance the Sinulog. Since then, on every third Sunday of January, a humble Santo Niño fiesta was held where the children wore Moro-Moro costumes while dancing the Sinulog.

What is the importance of the celebration?

The official Sinulog Parade began in 1980, organized by David S. Odilao Jr., then Regional Director of the Ministry of Sports and Youth Development (MYSD). The steps of the Sinulog dance were analyzed and enhanced. The first-ever Sinulog Street Dance Parade was held with the help of various teachers from different schools and universities in Cebu. After the parade, the idea of the Sinulog Festival then came into being. And in 1981, headed by the then Cebu City Mayor Florentino Solon and other influential names in the city, a committee was formed to organize the first Sinulog Festival.

The festival is not just a religious celebration but also a cultural celebration. This was the aim of the Sinulog Festival Committee. For instance, the official Sinulog Logo where the coat of arms of the House of Hapsburg (the ruler of most of the known world from the 15th century to 20th century) is imprinted on a native warrior’s shield. It symbolizes the continued resistance of the country to colonization.

It also represents the readiness of the Filipinos to defend their country from any and all forms of foreign incursions and to resist any event or action that poses a danger to the country’s self-determination. Meanwhile, the Santo Niño’s coat of arms imprinted on the face of the shield symbolizes the Philippines’ acceptance of Christianity when the European rulers brought it in 1521.

To distinguish the festival from the popular Ati-atihan Festival held in Aklan, the Sinulog Parade instead depicts the history of Sinulog – the dance that links Christianity with the country’s pagan past. There were also seven floats that symbolize the seven different periods of said history, each followed by dancers wearing costumes.

These became the avenue for the Cebuanos to show both their ancestry and creativity as they perform extraordinary performances that capture the hearts and attention of the locality and the world. In fact, the Sinulog Grand Parade is usually streamed live through live TV broadcasts for international audiences.

LIVE performance cancelled due to COVID-19

Every year, the Sinulog Festival gets better and better. Sinulog 2021 would have been its 41st year of celebration. Unfortunately, due to the COVID-19 pandemic, it was decided that the celebrations will be canceled.

Instead of live performances, recorded performances from previous years will be shown instead.

However, there are still talks about Sinulog participants performing the ritual dances in April, the 500th anniversary of the arrival of Christianity.

Stay updated on Sinulog 2021 news on their official website: https://sinulog.ph/.