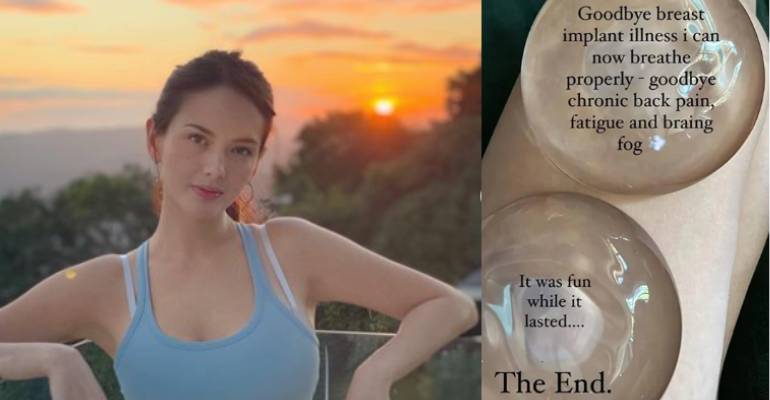 MANILA, PHILIPPINES — Ellen Adarna shared breast implant removal after experiencing an illness causing her symptoms, including fatigue and back pain, on her Instagram last Sunday, May 8.

The actress revealed to her fans about her surgery by showing her now-removed implants on her Instagram Stories. Ellen mentioned that she was suffering from breast implant illness that caused her a wide range of symptoms, which developed after her breast augmentation.

In her post, she stated she was also experiencing difficulty breathing as one of the symptoms she was experiencing during the moment.

“It was fun while it lasted. The end,” Ellen added.

The actress’s husband, Filipino actor Derek Ramsay, gifted her with a cake and an icing that read, “I miss your old boobs,” which was also included and seen in her Instagram Stories during her revelation.

A video story also shows the model sharing her condition to her son, Elias, saying, “My boobs are smaller.”

“But there’s still a little…,” she added.

In February 2022, Ellen admitted to becoming cautious and practical when choosing swimwear as she candidly shared her life as a mom to her son.

Ellen and Derek confirmed being in a relationship last February 2021. A month later, the couple got engaged. They then got married in Bataan on Nov. 11, 2021.

In 2015, a beauty clinic featured Ellen during the Women’s Month campaign for breast augmentation surgery.

She then made her first confession to having breast implants last 2014. On the day of her revelation, she candidly said, “my boobs are fake.” – WhatALife!

Also Read: Secretlab brings back The Pokémon Collection in the Philippines!