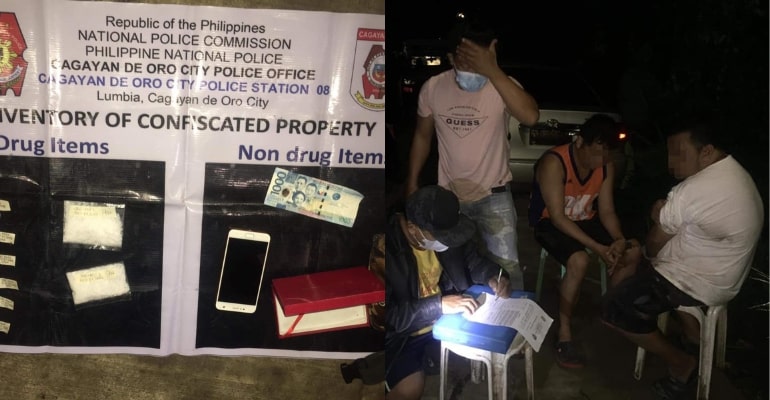 CAGAYAN DE ORO, PHILIPPINES —  An estimated Php 408,000 worth of shabu was seized from two arrested suspects in a buy-bust operation by the Cagayan de Oro City PNP on Wednesday, July 27, 2022.

According to Mandia, the suspects were arrested around 7:00 pm at MPC Line, Villa Angela Subd. Brgy. Balulang by operatives of the Station Drug Enforcement Team of the COCPO Station 8.

In a police report detailing the operation, it was learned that the raiding team had first bought from the suspects a sachet of heat-sealed transparent cellophane containing the white crystalline substance of suspected shabu worth P1,000.

The same group then recovered from the possession of Tungol two large sachets and another five small sachets, all containing suspected shabu.

The two packages of suspected shabu weighing 60 grams were estimated to be worth Php 408,000. Also confiscated from the two suspects were a white Asus brand smartphone and Php 1,000 bills used as buy-bust money.

The suspects are now under the custody of the aforementioned police station. They are just waiting for a case to be filed.

The two suspects will be charged with violating RA 9165 or the Comprehensive Dangerous Drugs Act of 2002.

During a press conference at COCPO headquarter last week, City Mayor Rolando Uy promised the police officials that he would give incentives to every accomplishment the police would make.

Mandia said that his men were still investigating the suspects as to the identities of their source of the hot items. He also lauded the efforts of everyone involved in the successful operation.

The CDO PNP continues the anti-drug campaign to make the city drug-free and safe from any type of criminality. – WhatALife!/Zed