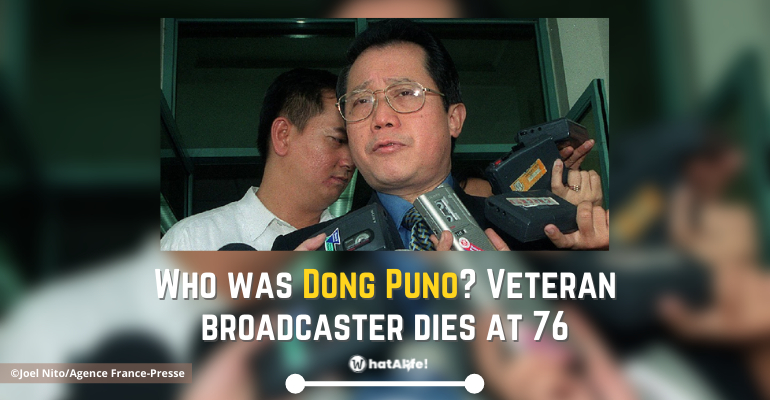 MANILA, PHILIPPINES — Ricardo “Dong” Puno Jr. died yesterday (February 15) at the age of 76. The veteran journalist and broadcaster passed away after 10 years of battling Parkinson’s disease.

According to his sons Ricky and Donnie, Dong Puno succumbed to his lingering illness at 12:15 pm on February 15. Puno had lived a full life serving the Filipino people as former Press secretary, a lawyer, and a national broadcaster of ABS-CBN and GMA.

Who was Dong Puno?

Puno was one of the 12 children of former Justice Minister and Court of Appeals Associated Justice Ricardo Puno Sr. He was the eldest of the brood and the first to pass away.

He obtained two bachelor degrees from Ateneo de Manila University and proceeded with Masters of Laws degree from Harvard Law School. Along with his lawyer brothers, they became associates of the Puno&Puno Law offices founded by their father.

Puno became a senior vice president of the TV giant under ABS-CBN News and Current Affairs before being appointed as press secretary in 2000 under former Philippine President Joseph “Erap” E. Estrada. He ran for a senatorial seat in 2001 but lost, after which he went back to ABS-CBN.

Malacañang conveyed their grief on Tuesday. Cabinet Secretary Karlo Nograles, acting presidential spokesperson and former co-worker of Dong Puno, said in a statement, “Known for his intelligent, insightful interviews, Secretary Puno received numerous distinctions for his work in public affairs programs that helped provide the public with a better understanding of the issues of the day.”

He also added, “Our thoughts are with the loved ones of Secretary Puno as we join them in praying for his eternal repose.” – WhatALife!