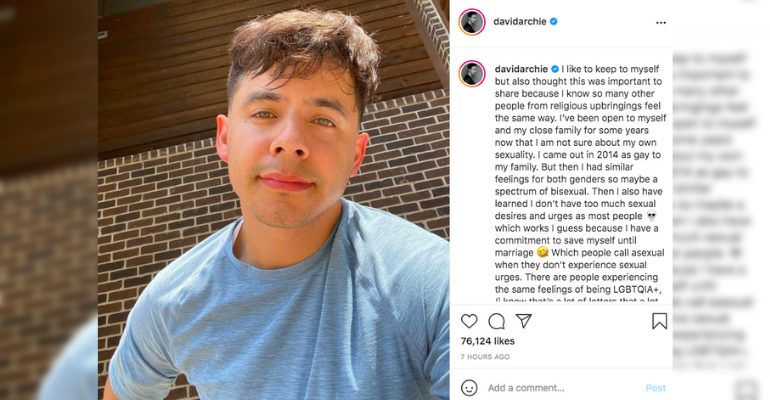 The ‘American Idol’ star reveals his struggles reconciling his sexuality with his faith as a Mormon.

‘American Idol’ alumnus David Archuleta came out as a member of the LGBTQ+ community on Saturday, June 12, saying that he “tried for almost 20 years to try and change” himself as he dealt with reconciling his faith with his sexuality.

In his Instagram post, the now 30-year-old singer-songwriter admitted that he was uncomfortable sharing this personal part of his life but wanted to raise awareness for “other people from religious upbringings” who felt the same way.

“I’ve been open to myself and to my close family for some years now that I am not sure about my own sexuality,” he said, adding that he already came out in 2014 as gay to his family. However, after realizing that he had similar feelings for both genders, he later identified as bisexual.

“Then I also have learned I don’t have too much sexual desires and urges as most people, which works I guess because I have a commitment to save myself until marriage, which people call asexual when they don’t experience sexual urges,” he added.

Archuleta, a faithful member of the Church of Jesus Christ of Latter-Day Saints (also known as the Mormons), said that while this spectrum poses more questions for other people, what’s important is for people of faith to be more compassionate towards LGBTQ+ community members.

He further shared about coming to terms with his sexuality and his faith, saying, “I don’t think it should come down to feeling you have to accept one or the other. For me to find peace, the reality has been to accept both are real things I experience and make who I am.”

“You can be part of the LGTBQ+ community and still believe in God and His gospel plan,” he declared.

Archuleta said his journey towards acceptance wasn’t easy. “I’ve tried for almost 20 years to try and change myself until I realized God made me how I am for a purpose. And instead of hating what I have considered wrong, I need to see why God loved me for who I am and it’s not just sexuality,” he said.

The singer ended his post by encouraging his followers to be more open in expressing their opinions. “Even if you’re left with so many more questions with faith and sexuality like me, I believe being open to both questions and to faith is how we receive answers. So let’s keep asking and seeking, and having compassion and patience.”

Archuleta rose to fame after he finished second on the 7th season of American Idol in 2008. He then released his hit-single ‘Crush’ from his self-titled debut album, which ranked number two on the Billboard 200 chart.

He has also performed in the Philippines several times, even starring in a series with Jasmine Curtis-Smith and releasing an album of covers of classic Filipino songs.