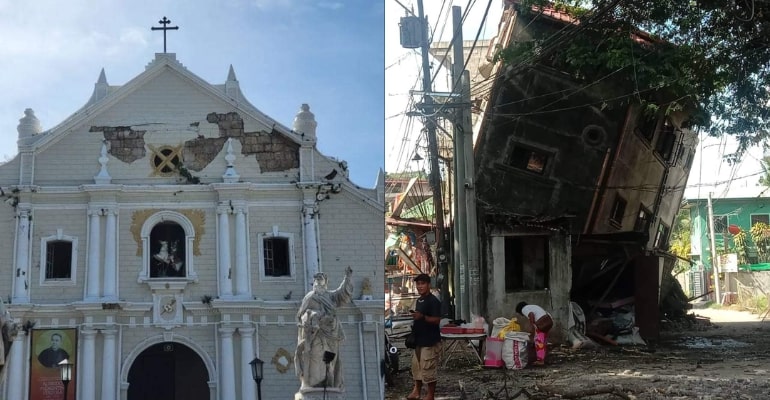 According to USGS, the PAGER is at YELLOW for fatalities and damage. Here are the damages:

See photos of the damages in Abra Province below:

Congresswoman Hon. Ching B. Bernos posted a press release about the earthquake, urging everyone to stay alert and prioritize safety.

“More importantly, please join us in praying for Abra and the continuous safety of our beloved Abreños,” she said.

Power interruptions were also reported in the area and Laoag City in Ilocos Norte.

In Pampanga province, the employees of offices leasing space in One West Tower in Clark Freeport rushed out to escape the building.

Pampanga province Angeles University Foundation has also canceled both classes and office operations due to the strong quake.

Governor Dennis Pineda immediately advised Pampanga residents to watch out for the aftershocks. Local disaster officials are now monitoring other areas for damages.

Some heritage structures and churches in Vigan, Ilocos Sur, were seen to have been damaged after the tremor, which rattled most parts of Northern Luzon.

Some partial damages could be seen in the front portion of the Vigan Cathedral.

Baguio Mayor Benjie Magalong suspended work and classes for both public and private establishments in the wake of the strong earthquake felt in the city. In addition, Magalong will lead a citywide inspection of the damages and fatalities resulting from the quake.

See more photos of the damages of the earthquake in different parts of Luzon below:

This is a developing story. – WhatALife!/Zed