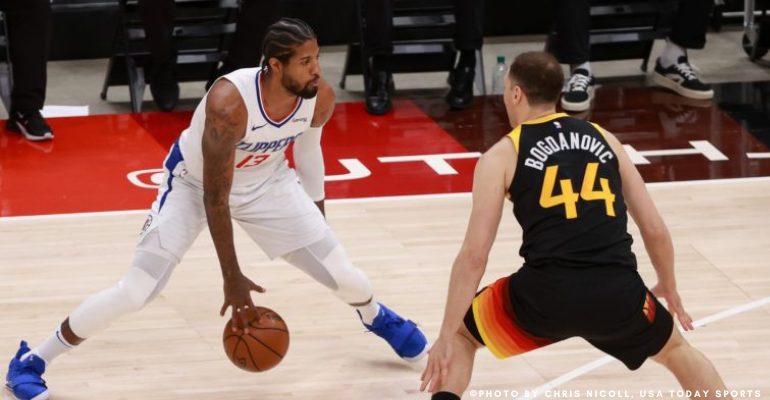 The Los Angeles Clippers are coming back stronger and more experienced as they notched another victory in the 2021 NBA Playoffs. They beat Utah Jazz at 132-106 in Game 3 of Clippers vs Jazz. Their win takes LA to a 2-1 deficit in the series.

Brief Recap of Game 3 of Clippers vs Jazz

Game 3 of Clippers vs Jazz was by far the most impeccable performance for the LA Clippers in the series. They did everything that they could to get out of the 0-3 series hole.

The Utah Jazz raced out to an 8-0 start, which led Tyronn Lue to call a timeout. However, the Clippers buried a 3-pointer after the timeout, courtesy of Batum. From there, Los Angeles fought back and got the game to 10-10.

LA led 27-23 through one quarter while Donoval Mitchell was shut out in the 1st quarter. That’s why Joe Ingles led the Jazz in the first half, as he scored 14 points in the game’s opening. But, Reggie Jackson and Paul George were sharp from the start. The Clippers’ players posted 12 points by the midway point of the 2nd quarter.

The Clippers continued to keep their lead bigger by going up by 16 at one point before heading into the halftime break, with a lead of 64-49. The one leading Los Angeles to victory was none other than George, who posted 20 points.

The LA Clippers maintained their edge until the 3rd quarter. Jazz tried to make a final rally, but the Clippers’ defense was able to hold off any comeback attempt until their victory in the fourth quarter.

There have been disparaging nicknames given to George every time he suffered through a rough stretch during a playoff game. His sullied reputation was brought about by his rough performance in Game 7 of Clippers vs Nuggets last year. It also includes his shot off the side of the backboard mishap.

But with his brilliant performance in Game 3 of Clippers vs Jazz, he is slowly shedding off the nicknames. The Clippers’ win was all due to his fantastic play. George scored 31 points on 6-for-10 3-point shooting as well as 5 assists. He was clearly determined to win by taking 24 shots. This is the most George ever attempted in a playoff game as a Clipper.

Because of his phenomenal performance, the Clippers were able to save themselves from another defeat.

The Clippers vs Jazz Game 4 will be on Tuesday, June 15, at 10:00 PM ET. Both teams will be fighting it off at the Staples Center, and the Los Angeles Clippers will surely be looking for a carbon copy of Game 3 of Clippers vs Jazz to tie up the series.