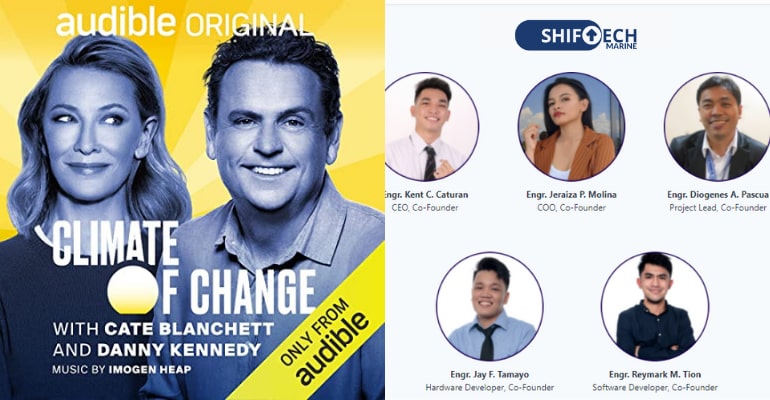 LONDON, UNITED KINGDOM — Audible, a premier producer of audio products and services, recently launched “Climate of Change with Cate Blanchett and Danny Kennedy,” a podcast series featuring a local startup in Cagayan de Oro. Their line-up of speakers in their six episodes includes Jeraiza Molina, an entrepreneur residing in the city, as one of the guest speakers.

Molina was featured as a co-founder of the startup Shiftech Marine. She was interviewed in Episode 1 “The Sooner the Better.” where she was introduced as an entrepreneur “bringing clean energy to night fisherfolk.”

On the podcast’s episodes, listeners can hear the award-winning actor, producer, and environmental advocate, Cate Blanchett, and climate entrepreneur and activist Danny Kennedy as they discuss and explore eco-anxieties and how to remain optimistic about the future.

Prince William appeared on the podcast’s second episode, giving an exclusive update about his ambitious Earthshot Prize since the announcement of the first winners.

Cate and Danny are thrilled to highlight a few innovators who had a contribution to the environment through their podcast “Climate of Change.”

It features interviews that aim to give an overview of the biggest challenges humankind is continually encountering and the created innovative solutions to tackling those challenges.

Dirty Films, in association with StoryHunter, created the “Climate of Change” podcast for Audible. – WhatALife!