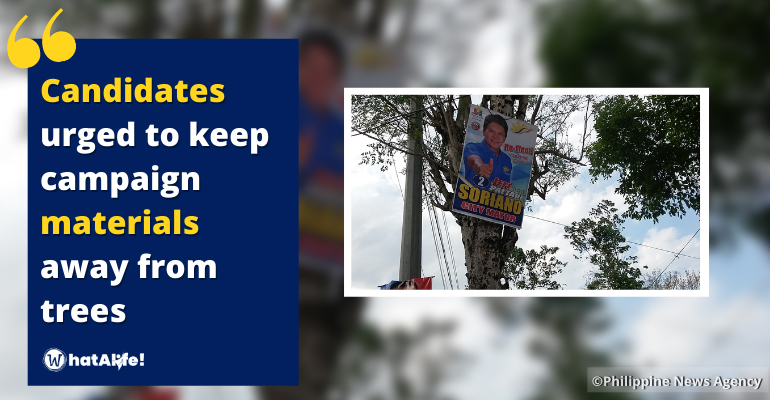 CAGAYAN DE ORO CITY, PHILIPPINES — Starting March 1, the City’s Local Environment and Natural Resources office on CLENRO urges candidates and its activists to refrain from posting their campaign materials on trees to protect them from any damage.

Engr. Armen Cuenca, the head of CLENRO, said that those who violate it are likely to face punishment based on the law.

Section 9 of Republic Act 9006 or the Fair Election Act of 2001 states that posting campaign materials may only be allowed in common poster areas such as plazas, markets, barangay centers, and the like.

“In no circumstance shall an election officer designate as common poster areas any trees, plants, or shrubs in any public grounds,” according to Section 21(B) of the Commission on Elections Resolution 10730.

Anyone who cuts, destroys, damages, or injures naturally grown or planted trees would face a penalty of six months to two years in prison and a fine of up to P5,000, according to Section 3 of Republic Act 3571.

Engr. Cuenca, as a result, advised the candidates and activists not to put their campaign posters on the trees. – WhatALife!