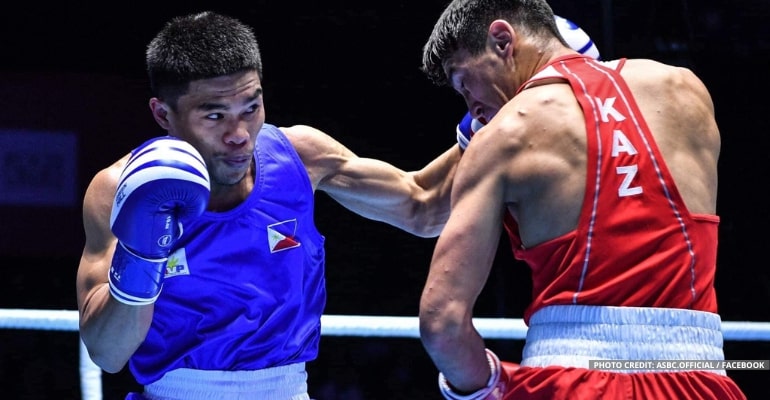 Previously, the Filipino boxer defeated Turkmenistan’s Muhanov Dovlet in round 16; then, he bested Korea’s Yoon Joo-sung in the quarterfinals. In the semifinals against Kyrgyzstan’s Sanzhai Seidekmatov, Paalam won with a unanimous decision and went straight to the finals.

The Cagayan de Oro native boxer had three consecutive unanimous decision victories on the way to the finals.

On November 12, Saturday, Paalam clashed against Kazakhstan’s Makhmud Sabyrkhan. Ultimately, he won the crown of the men’s bantamweight division with a 4-1 split decision.

The judge from the United Arab Emirates gave 30-27 marks in favor of Paalam, while the judges from India, Slovakia, and Ireland scored him the same 29-28. Only the judge from Italy decided in favor of Sabyrkhan with a 29-28.

In 2021, Sabyrkhan won the bantamweight silver in the AIBA World Boxing Championships in Belgrade, Serbia. As such, he was a top seed and came in as the favorite in the championship match.

However, Carlo Paalam was a dark horse in the competition; the five judges gave him identical 10-9 scores in the opening round. In the last two rounds, he held off Sabyrkhan before finally claiming the championship with a split decision.

Mayor Uy wished him the best as he advanced to the Asian Boxing Finals in the bantamweight division.

(Carlo Paalam is a great inspiration to the youth. Thank you for your efforts that bring pride to our city and the Philippines)