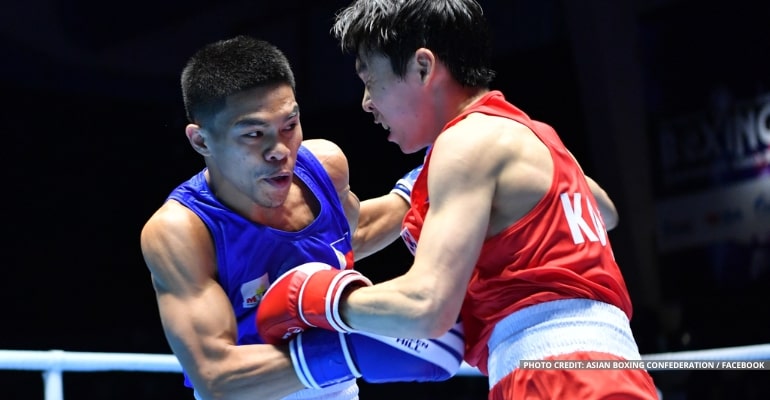 The Filipino bantamweight boxer participated in international competitions between 2016 and 2021 but could not compete in any events in the previous 15 months.

Paalam had a smaller build than his opponent, the South Korean Yoon Joo Sung, but he used his superb attacking style to catch his opponent off guard. In the end, he was able to save up his power and stamina between the three rounds. He won the quarter-final match, earning the Philippine team its second medal in the competition.

Fighting at the 63.5 kg light welterweight class, Baguio City’s Palicte, 28, lost the first round of the competition to take the next two rounds. At the match against the Iraqi, Jaafar Abdulreal Sudani, he picked up the pace and won the bout by four to one.

Meanwhile, in his 57 kg featherweight match, Bukidnon airman Fernandez went up in a match against the host country’s Yousef Iashash. After a close fight, he lost to a technical decision with the score three to two.

In the match, the 29-year-old veteran fought mightily, connecting with some great combinations but could not handle the Jordanian. Yousef employed some unorthodox tactics in the fight, it was what earned him the vote of the Morocco, Italy, and Kyrgyzstan judges. Meanwhile, the judges from Bulgaria and India were in favor of Fernandez for the win but were outvoted.

For both fights of Palicte and Fernandez, the ABAP (Association of Boxing Alliances in the Philippines) coaches Don Abnett, Roel Velasco, and Gerson Nietes were at ringside giving instructions and support. For the women’s coaches, Reynaldo Galido and Mitchel Martinez took center stage, with ABAP secretary-general Marcus Manalo as the Filipino team’s manager.

There are 13 Filipino boxers in the championships (seven men, and six women) including Tokyo Olympians Carlo Paalam, Nesthy Petecio, and Irish Magno. – WhatALife!/Zed