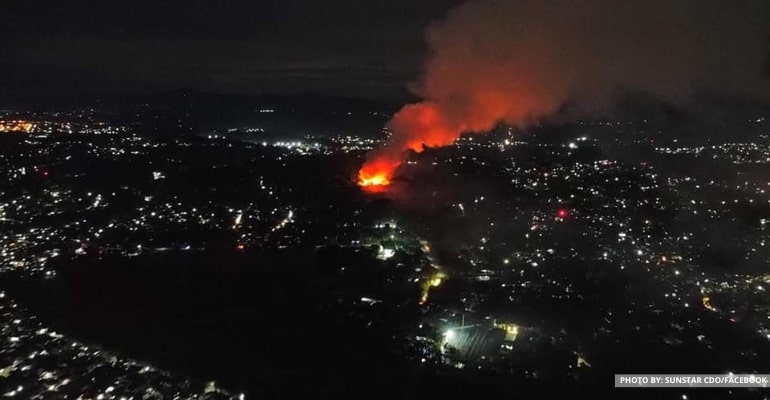 The fire and explosions caused a stir among residents nearby the area, many sharing videos, and photos of the incident.

This morning, the 4th Infantry Division (4ID) released a press statement about the event.

The fire broke out in one of the buildings inside the Ammunition Complex, 10th Forward Service Support Unit (FSSU), Army Support Command (ASCOM), PA, Camp Evangelista. The building contains 155mm Howitzer round and other small arms ammunition.

After being reported, 11 fire trucks immediately went to the scene. However, fire authorities could not get close due to the dangerous explosions.

The fire was out at 3:10 am, according to the statement.

No casualties from the military personnel are reported, but three civilians incurred minor injuries due to shrapnel, one of which is a 15-year-old resident nearby the incident. They have been treated at Camp Evangelista Station Hospital.

All personnel and 49 civilian families nearby the incident have evacuated for safety to the 4ID Gymnasium, the camp’s designated evacuation center.

The cause of the fire is yet to be determined.

Currently, the area is subject to a cooling period before Explosive Ordnance Disposal (EOD) personnel can clear and contain the area. Afterward, the investigating authorities of the army and city fire department will conduct a thorough investigation to determine the cause and the damages.

In partnership with Barangay Patag and CDO City Social Welfare and Development (CSWD), the 4ID Command is currently giving psycho-social support and stress debriefing to civilians and other affected individuals at the Evacuation Centers.

Check out photos and videos of the fire and explosions below: