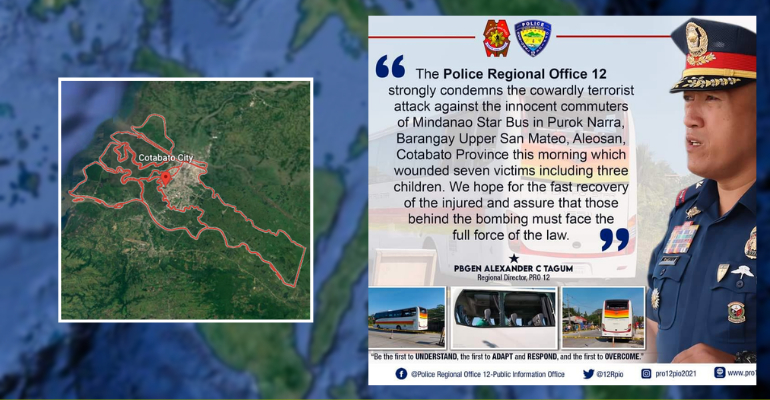 A Mindanao Star Bus exploded this morning in Purok Narra, Barangay Upper San Mateo, Aleosan, Cotabato Province. Seven individuals are identified as injured including a five-month-old baby. The Improvised Explosive Device (IED) detonated at the back portion of the passenger bus.

Initial investigation by the Police Regional Office 12 disclosed that an unidentified suspect boarded the bus in Kabacan, Cotabato Province while carrying a baggage. He then disembarked at Pikit, Cotabato Province, leaving his baggage.

Other than the 5 months old baby, there are also two other children injured – Yushra (age 3) and Benjamin (aged 5) Solaiman from Maguindanao.

Lieutenant Colonel John Paul Baldomar, spokesperson for the 6th Infantry Division, said that the 5 year old is in critical condition. Most of the victims identified below are relatives:

Police Chief Master Sergeant Randy Hampac, the Aleosan Police spokesperson, said the explosion occurred in a busy area at past 8 a.m. He said that personnel Scene of the Crime Operation (SOCO) and Explosive Ordnance Disposal (EOD) are conducting an ocular inspection in the area and the CCTV installed in the bus may be used in the investigation.

PRO12 has also organized a Special Investigation Task Group headed by Police Colonel Michael Lebanan for a thorough investigation of the “heinous terrorist attack to a civilian target.”

“The Police Regional Office 12 strongly condemns the cowardly terrorist attack against the innocent commuters of Mindanao Star bus. We hope for the fast recovery of the injured and be assured that those behind the bombing will face the full force of the law.” – Jeraiza/WhatALife.ph