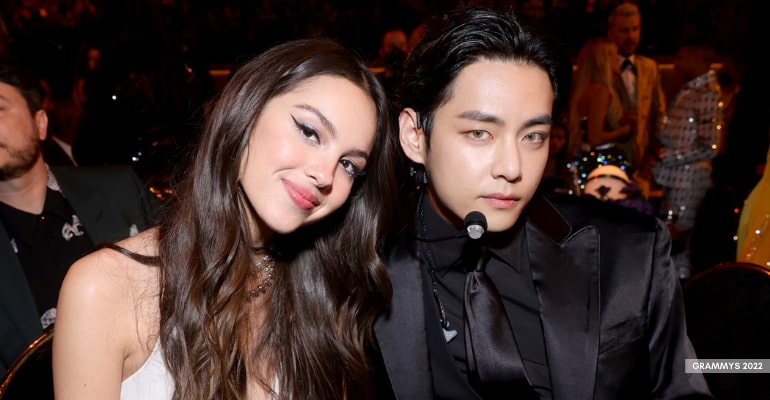 Two of music’s biggest stars had a flirty exchange at the 2022 Grammys! Before his band performed their smash song Butter, BTS V had a few words with star singer Olivia Rodrigo.

BTS, a South Korean boy band, performed their song “Butter” at the 64th Annual Grammy Awards on April 3, 2022 at MGM Grand Garden Arena in Las Vegas for their performance for the awards night.

BTS V, aka Kim Tae-hyung, who flirted with Olivia Rodrigo, caught everyone’s attention. Apparently, before joining his band members for the performance, he ‘whispered’ something in Olivia’s ear.

This event turned out to be the most widely shared moment of the evening.

The official BTS fandom, known as ARMY, became ecstatic as a result and is now demanding that both pop idols collaborate. On Twitter, BTS fans have expressed their reactions in a variety of ways.

Here are some reactions about V and Olivia Rodrigo’s Grammys 2022 moment:

Lea Salonga mentions “V whispering in Olivia’s ear” in a tweet commending the group for their performance.

Okay, can we talk about @BTS_twt’s Grammy performance with Jung Kook’s entrance from the ceiling, V whispering in Olivia’s ear, Jin hacking everything, and that dance break? That took me right out! Sooooo good! #GRAMMYs

On the other hand, many fans like the Twitter user below expressed their wish to be Olivia,

can’t believe i’m saying this, but i actually wanted to be olivia rodrigo for 17 seconds