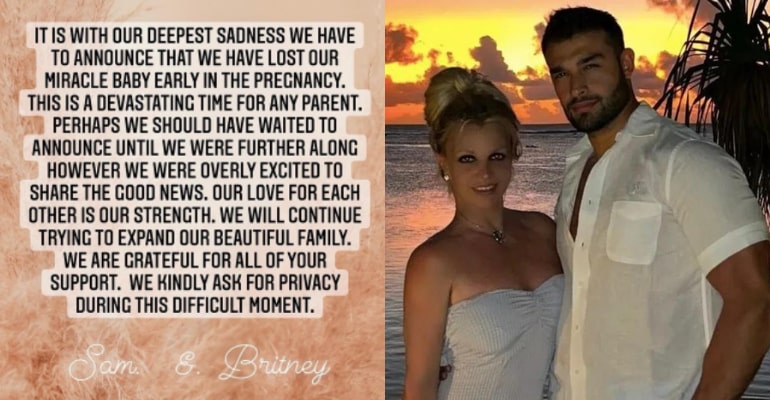 Britney Spears took to Instagram on Saturday, May 14, to share a joint statement with her husband, Sam Asghari, about the recent miscarriage of her “miracle baby.”

The American singer-songwriter announced her third pregnancy and marriage with Sam on social media last April 11, 2022.

Britney stated on her Instagram post that she was going through a difficult period in her life and perhaps should have waited to announce her pregnancy.

In the post’s comments section, Sam said to her, “We will have a miracle soon.” The couple also requested privacy as they are having a difficult time.

Her fans, social media followers, and co-celebrities expressed their condolences to the Toxic singer after announcing losing their expected baby.

Last September 13, 2021, the 40 years old pop superstar got engaged to her 28 years old fitness enthusiast and actor, and announced it on their Instagram accounts by posting videos and snapshots of the event.

In 2004, Britney married dancer Kevin Federline, with whom she had two sons, Jayden and Preston. She then divorced Kevin in 2007. Before marrying Kevin, she was with the actor Jason Alexander and got divorced in the same year.

Last 2008, a report says the pop star ended the 13 years of conservatorship set up by her father after County Superior Court Judge Brenda Penny of Los Angeles ruled in favor of her request to terminate the court case.

Addressing the court, she stated that she had been drugged, forced to perform against her will, and prevented from marriage and pregnancy.

Her father, Jamie, said they kept her in conservatorship because of her mental health concerns. – WhatALife!

Also read: Britney Spears announces her third pregnancy: “I am having a baby.”